Charges have been filed against a suspect arrested in a fatal crash at 6200 Gulf Freeway (South Interstate Highway 45) service road about 7:20 p.m. last Friday (Jan. 31).

The suspect, Eliana Blu Morin (H/f, 19), is charged with failure to stop and render aid in the 177th State District Court.  A booking photo of Morin is attached to this news release.

The identity of the deceased male, 38, is pending verification by the Harris County Institute of Forensic Sciences.

The victim, a pedestrian, was running across the southbound lanes of the service road at the above address when he was struck by a black Chevrolet HHR.  The driver, Morin, fled the scene and returned about 15 to 30 minutes later.  She was arrested and subsequently charged.

Paramedics transported the victim to Memorial Hermann Hospital where he was pronounced deceased.

It was learned the male was possibly fleeing a scene where he was involved in a disturbance/assault of a female. 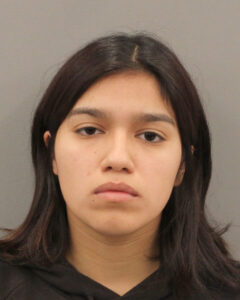