Charges have been filed against a suspect arrested in the shooting of a man at 4601 Sherwood Lane about 1:15 a.m. on Sunday (Feb. 2).

The suspect, David Jose Molina-Lopez (H/m, 21), is charged with aggravated assault with a deadly weapon in the 177th State District Court.  A booking photo of Molina-Lopez is attached to this news release.

The victim, Jose Eulogio Diaz Orellana, 48, was transported to an area hospital in stable condition.

Mr. Orellana was standing and drinking in the rear parking lot of the apartment complex at the above address when he was approached by Molina-Lopez, who opened fire and shot Orellana more than once in the abdomen.  Witnesses saw Molina-Lopez flee the scene on foot.  Paramedics transported Orellana to an area hospital.

Patrol officers in the area located Molina-Lopez and took him into custody.  He was subsequently charged for his role in the shooting. 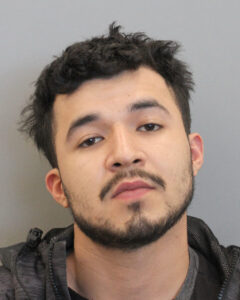