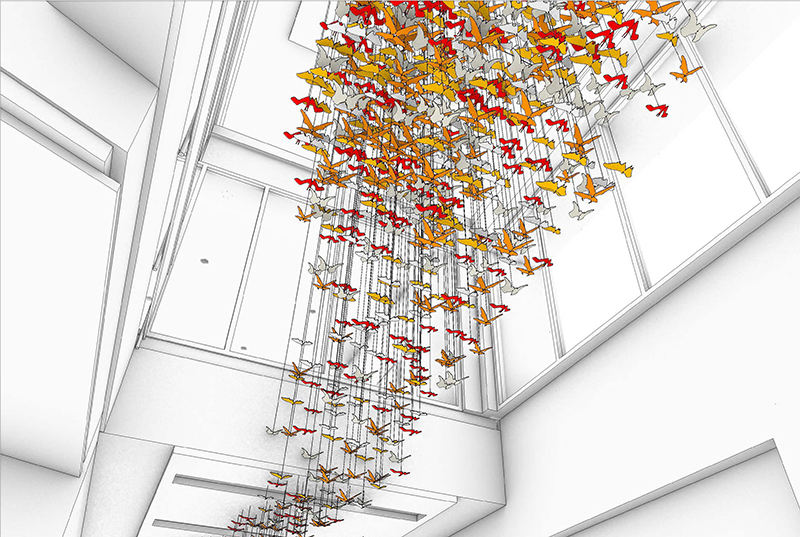 September 28, 2021 -- The Mayor’s Office of Cultural Affairs (MOCA) is pleased to announce three public art commissions that will be displayed in the landmark Alief Neighborhood Center scheduled to be open in the Spring of 2022. Two interior and a single exterior commissioned public artworks will debut with the facility opening and will be added to the City’s Civic Art Collection.  ;Each was created by Houston-area artists Bennie Flores Ansell, Falon Mihalic, and Red Thread Collective – Rakhee Jain Desai, Ami Mehta, and Sneha Bhavsar.

The new $54-million mixed-used center will accommodate three City of Houston facilities under one roof, creating a civic center at the heart of a redeveloped 38-acre active urban sports park.  A new paradigm for providing City services, the 70,000 sf 3-story LEED-certified, award-winning building is the first of its kind, designed to leverage resources between the Houston Health, Houston Parks and Recreation, and Houston Public Library departments for the benefit of the Alief Complete Community with special focus on community engagement, identity, and civic wellbeing.  In the event of natural disasters and emergencies, this facility will also serve as resilience hub or lily pad.

"Each of the local artists selected to create artworks for this state-of-the-art facility highlight the strength of Houston’s creative community,” said Mayor Sylvester Turner. "The three commissioned public artworks that will be displayed at the Alief Neighborhood Center will not only enhance the Alief Complete Community, but will also inspire its residents and make the entire city proud.”

Each of the three commissioned artworks - Folding Stories (Red Thread Collective), Alief Swarm (Bennie Flores Ansell), and Windbloom (Falon Mihalic) - will engage the Alief community to participate in the completion of commission designs ahead of fabrication.

Folding Stories, a suspended sculpture, welcomes visitors to the Center while celebrating the strength of diversity in Alief and will seek writing samples from Alief ISD students and civic groups. Alief Swarm also seeks direct connection with residents and will feature 1,000 shoe-inspired butterflies created from photographs of shoes captured by the artist. Embedded in the urban parkscape, Windbloom will give form to the site’s ephemeral ecological qualities and fortify the new neighborhood center as a place for reflection, connection, and discovery.

Each public art commission is planned for completion in the Spring of 2022.

About MOCA
The City of Houston Mayor’s Office of Cultural Affairs guides the City’s cultural investments with policies and initiatives that expand access to arts and cultural programs in the community, attract visitors and leverage private investment. 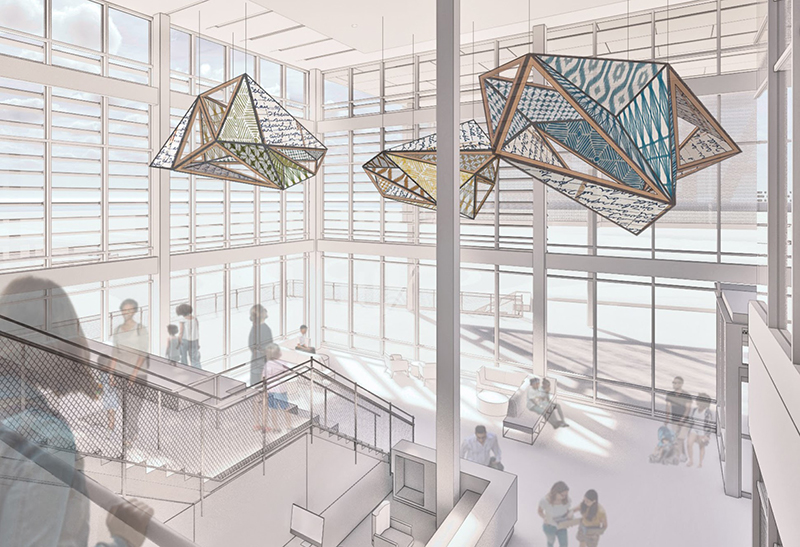 The community of Alief is a multicultural tapestry; woven from countless intriguing stories of strong female pioneers, of leaders embracing change, and of immigrant families full of aspiration and perseverance. “Folding Stories,” strives to honor these struggles and successes by creating three multifaceted sculptures with hand-painted, culturally inspired textiles. These textiles will serve as a visual narrative of Alief’s incredible journey to becoming one of the most ethnically diverse neighborhoods in the US. Taking inspiration from the founding female postmaster, Alief Magee, the artists will collect written letters from residents. Excerpts from these letters will be superimposed on the fabric facets, ensuring the sculptures resonate with words of wisdom and hope directly from the people of Alief.

As South Asian female artists and long-time Houstonians, Rakhee Jain Desai, Ami Mehta, and Sneha Bhavsar (The Red Collective) believe in the intrinsic value that every diverse person contributes to a thriving community. “Folding Stories” will create a thought-provoking and intimate creative experience that will encourage the residents of Alief to gather, learn, and grow from one another; further ensuring that the Alief Community Center serves as a welcoming and inclusive destination that will be embraced by current and future generations.

Alief Swarm will create an uplifting experience and provide a transition space to all. A swarm is the word for a large group of bees emigrating to start a colony in a different location. Like bees, any group of people can be considered a swarm emigrating and working together, fiercely toward a goal. The seed that Dr. Paul Quillian planted for a youth center in Alief 60 years ago, is now growing into this spectacular facility.

Community Involvement and ownership is a large component of this artwork that will be suspended from the ceiling space of the East Entrance and atrium. Composed of over a thousand of what appear to be butterflies, upon closer inspection the viewer will see that they are in fact shoes.  Houston-based visual artist Bennie Flores Ansell will gather the 1,000 shoe models and engage community groups and online voting to select the shoes that will be used to create the individual laser cut printed dichroic plexiglass she-butterflies that connect this indoor piece to the outside butterfly garden. 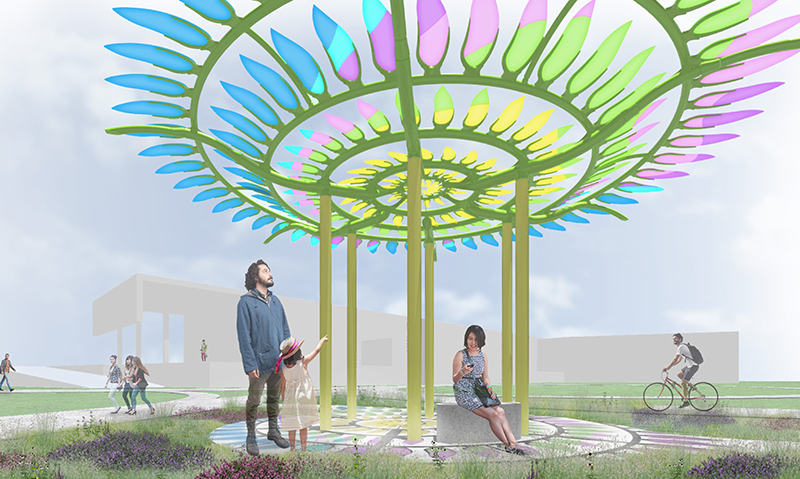 Windbloom is an overhead sculpture, like an umbrella, meant to be experienced up close from underneath as a colorful shading device or from a distance as a supersized flower map. Viewable from the new Alief Community Center front porch, it is at the scale of the larger landscape and nestled within the butterfly garden. Inspired by the native site ecology as an open coastal prairie, it creates a colorful map of the site’s prevailing winds with “petals” of colorful resin. Constructed of painted carbon steel, polycarbonate resin panels, and customized attachments, all components of the sculpture are envisioned as “plant-like” with the structural supports taking on the form of plant tendrils and the attachment plates modeled after a flower calyx (the plant part between flower petals and leaves). Interdisciplinary artist Falon Mihalic will invite the community to interact with the work both through firsthand experience of the piece and through the community engagement wind map diagrams housed in the public library.

MOCA contracts with Houston Arts Alliance Civic Art + Design team, funded by the City’s Civic Art Ordinance, to commission and acquire permanent artworks for the City of Houston Civic Art Collection which are enjoyed by more than 64 million people each year.

Bennie Flores Ansell is a Houston based visual artist. Flores Ansell is currently a Professor in the Art Department of the Houston Community College. She completed her MFA in Photography at the University of Houston and an undergraduate degree in Photography from the University of South Florida. Flores Ansell was born in 1967 in Manila, Philippines and moved with her family to the United States that same year. Flores Ansell was awarded a Fellowship at the Houston Center for Photography and the National Graduate Seminar at the American Photography Institute at New York University in 1999. In 2000, she was selected from the fellows of the previous years to return to NYU to discuss the shifts occurring in photography, specifically the impact of digital imaging. Flores Ansell’s work has been exhibited at The International Center for Photography, NYC; Seattle Art Museum; and The San Diego Museum of Art as part of the Only Skin Deep Exhibition curated by Coco Fusco and Brian Wallis. Her work was also included in the group show Inside Outside: Texas Women Photographers curated by Anne Tucker and Clint Wilour. She has shown her work internationally at Festival De La Luz, a 65-photography festival in Argentina, Uno Art Gallery in Stuttgart, Germany and in a site-specific installation at the Daegu Photography Biennale in South Korea. In 2017, she was commissioned by Institute of Contemporary Art in Boston to design an interactive public piece titled “Fish Out of Water” for the educational space Art Lab based on migrations of people to the United States. Last summer, her work was part of the Confluencias group show at Patricia Conde Galeria in Mexico City.

Falon Mihalic is an interdisciplinary artist based in Houston whose projects include site-based installations, light art, and permanent public art commissions. Working across painting, sculpture, interactive public art, and landscape design, she uses color, light, and space to investigate the human connection to natural systems. Falon has a Master of Landscape Architecture degree from the Rhode Island School of Design and a B.A. in Natural Sciences from New College of Florida. Falon’s recent project, Climate Pulse, is a weather-responsive parametric sculpture sited in Houston’s Emancipation Park. Climate Pulse is powered by 2400 programmed LED lights that pulse and change color in response to ambient temperature and humidity levels. Her work has been exhibited in galleries and public spaces in Houston, Dallas, Chicago, Providence, and Boston. Falon owns and directs Falon Land Studio LLC.

Red Thread Collective
Rakhee Jain Desai is a multidisciplinary artist whose work creates dialogue about the immigrant identity, assimilation experience and belonging. Her current body of work utilizes the centuries-old, wax-resist textile technique, Batik. The combination of Batik, an Eastern craft, with traditionally Western mediums (encaustic, oils and acrylics) is a signature process that aptly communicates her South Asian American identity. Born in Canada, raised in Houston, Texas and having lived in Asia for a decade, Rakhee’s Indian heritage and global lens are evident through her choice of palette and use of symbolism.

Ami Mehta studied and practiced architecture for more than 12 years before making the transition to full-time visual artist. She draws from this architecture background to build dynamic compositions in her work, balancing the constraints of a rigorous structure such as a grid, with organic mark-making that produces various gestural textures such as scratches and drips. Ami works in charcoal, oil pastel, ink, and acrylic, and her distinctive color palette stems from her Indian cultural background, the 15 years she spent growing up in the Middle East, and her subsequent world travels. In her recent work, Ami is interested in merging specific aspects of the South Asian diaspora’s ethnic sensibilities with their American aesthetics.

Sneha Bhavsar is a mixed-media visual artist. She is driven to explore the tactile quality of the surface as well as its visual features. Her portfolio showcases a diverse range of art and contemporary craft drawn from artistic cultural practices around the world. Sneha incorporates traditional folk-art methods such as weaving, embroidery and hand block printing to many of her works. Many of Sneha’s diverse art pieces also integrate recyclables such as eggshells and thread. Sneha is a self-taught artist from California and currently resides in Houston, Texas. She began her career in Public Health while continuing to follow her interest in art education.