Charges have been filed against a suspect arrested in the shooting of a man at 5870 Beldart Street about 9:50 p.m. on Sunday (April 10).

The suspect, Keshante Shamirra Harris, 27, is charged with aggravated robbery with a deadly weapon and deadly conduct – discharging a firearm in the 185th State District Court.  A booking photo of Harris is attached to this news release.

She is accused in the shooting of Aaron Konte Williams, 29.

Mr. Williams and suspect Harris were in a prior dating relationship and have two children together.  Williams was bringing one of the children back from a weekend visit and had his current girlfriend in the vehicle with him.  Harris was upset Williams’ girlfriend was present at the time of the exchange and shot at Williams several times.  Williams was struck in the arm and leg.

Williams was transported by Houston Fire Department paramedics to an area hospitalfor non-life-threatening gunshot wounds.  Neither the girlfriend nor the child were injured.

Harris returned to the scene and was positively identified.  She was arrested and subsequently charged for her role in the shooting. 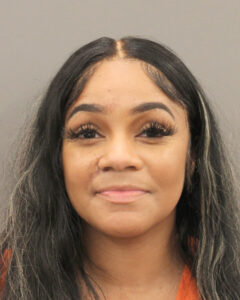