Houston police have arrested a suspect charged in an assault of a female at 3806 Solo Street about 2 p.m. on Saturday (May 16).

The suspect, Abel Hernandez (H/m, 31), is charged with aggravated assault on a family member in the 338th State District Court. A booking photo of Hernandez is attached to this news release.

The female victim, 52, was treated at the scene.

Officers responded to a report of a shooting at the residence at the above address. Upon arrival, they found suspect Hernandez had damaged his home and assaulted a female (his mother) while under the influence on unknown narcotics. Hernandez’s mother and brother attempted to calm him down, but Hernandez became increasingly violent. Hernandez grabbed a large chunk of concrete, weighing approximately 25 pounds, and threw it at his mother, striking her in the shoulder. Hernandez’s brother then shot the suspect in the leg, attempting to stop Hernandez from assaulting their mother.

Hernandez was arrested at the scene and confessed to his role in the assault of his mother. He was subsequently charged.

Additional investigation into Hernandez’s brother revealed he acted in self-defense. The shooting investigation will be referred to a Harris County grand jury. 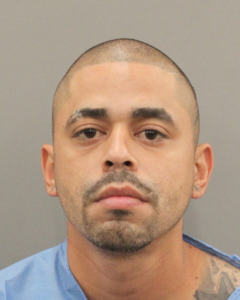