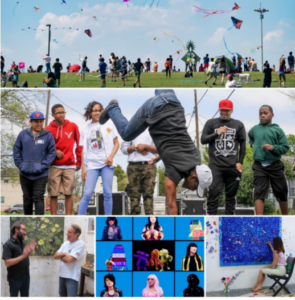 The Mayor’s Office of Cultural Affairs (MOCA) announced today the next milestone in the fulfillment of its Arts & Cultural Plan with grants totaling $1,631,698 to 109 artists and 32 arts and cultural nonprofits for public exhibitions, performances and festivals in 2019.

The grants, awarded through the Houston Arts Alliance, are funded through a portion of the city’s Hotel Occupancy Tax that is dedicated to the arts as part of the city’s cultural priorities guided by MOCA.“The strength of Houston’s creative economy includes artisans, artists, creative workers and festivals of every kind that uplift and invite the sharing of cultural traditions,” said Mayor Sylvester Turner.  “Our artists and festivals showcase Houston’s cultural diversity, and it is no surprise that Houston is recognized in numerous national rankings as a premier destination to visit.”

The grants are awarded via three new grant programs: Support for Artist and Creative Individuals, Let Creativity Happen and Festival. These new programs followed a year-long redesign of  grants offered through Houston Arts Alliance. The grant programs are meant to:

“The City, in its redesign efforts, expanded outreach to increase awareness of these opportunities to align with our vision and values of inclusion and equity,” said Debbie McNulty, MOCA director.  “Through our non-profit arm Houston Arts Alliance, the City partnered with community-based nonprofit institutions and City Council members to host grant workshops touching every corner of the City, surpassing previous outreach resulting in a significant increase in applications and first-time award recipients.”

Houstonians and visitors can find a multitude of offering produced by the grantees on the Cultural Events Calendar, which provides  programs details and more. Several activities are discounted or free.

Congratulations to all award recipients! Thank you for your dedication and contributions to the expansive arts and cultural landscape of Houston.

2019 Support for Artists and Creative Individuals

To learn more about the City’s cultural programs visit https://www.houstontx.gov/culturalaffairs/index.html and follow the Mayor’s Office of Cultural Affairs on Facebook @HoustonMOCA.