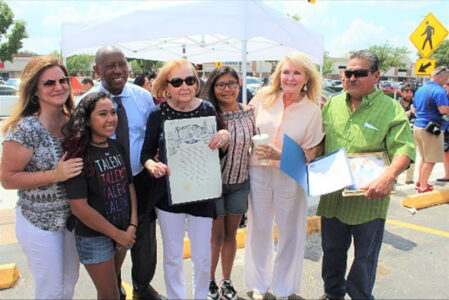 Mayor Turner dedicated street safety work to the memory of Jesus “Jesse” Perez and Lesha Adams, who were were struck and killed as Adams helped Perez across a Heights area street. With him were Perez’s brother Dennis Perez, right, and Adams’ widow, Stefanie Marsh left, her children and her mother.

Sparked by the deaths of two pedestrians crossing a street in the Heights area in March, Mayor Sylvester Turner recently announced the completion of new street safety projects and plans for more as part of the city’s Safe Streets initiative.

With the pedestrians’ survivors looking on, the mayor reported the citywide upgrades and activated a newly installed traffic signal at North Shepherd Drive and West 10th Street, where the pair were killed. In her Good Samaritan style, Lesha White, 54, was driving with her daughters on March 30 when she saw Jesus “Jesse” Perez struggling to cross the intersection in a wheelchair. She pulled over and was helping Perez when another vehicle struck the pair.

With many other intersections across the city still unsafe, it is hoped that upgrades will be made sooner rather than later. If you are a wheelchair user, please be wary of the intersections yet to have any work done as they will still be unsafe. In the meantime, it may be sensible to travel by car where possible. This can be made easier by using a foldable wheelchair, as it makes travelling in a car much simpler. You can read more about these wheelchairs by following the link.

The city streamlined the way it addresses reports of dangerous intersection as of the mayor’s April 11 news conference at the site. As a result, Public Works made traffic light repairs, wheelchair ramp installations and other improvements at many of the 667 intersections reported by the public in the last two months.

As a symbol of the work underway, Mayor Turner turned on the new pedestrian-activated traffic signal at the Shepherd intersection. The survivors and others then joined the mayor as he crossed the street.

Also since April 11, the Mayor’s Office for People with Disabilities logged and relayed to Public Works 20 requests for pedestrian access reviews, four times the usual amount. And Metro removed a bus stop three blocks south of the intersection to make it safer for bus riders to cross the street at stops.

Mayor Turner announced that the city is joining the national Vision Zero network designed to eliminate traffic deaths and serious injuries by 2030. He emphasized the network’s principles, including that all roadway fatalities are preventable.

“As the city doubles down on making streets safer for everyone, we always need residents, especially drivers, to work with us,” the mayor said. “Please take care, look out for your fellow Houstonians who are on foot, and avoid distractions such as cell phone use.” 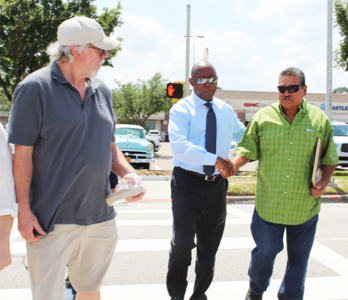