Charges have been filed against a suspect wanted in the shooting of a woman at 5465 Braesvalley Drive about 7 a.m. last Friday (July 16).

The suspect, Rashad Dabeon Williams (b/m, 26), is charged with aggravated assault of a family member in the 178th State District Court.  He is not in custody.  A 2020 booking photo of Williams is attached to this news release.

The victim, Elyssia Sapp, 23, was transported to an area hospital in stable condition.

Ms. Sapp stated she went outside her apartment at the above address to retrieve some documents from her vehicle when a known male (Williams) appeared from around the corner of a building.  She stated the two of them began to argue.  Sapp indicated Williams then pulled a gun from his waistband and pointed it at her.  She said she then heard several shots and fell to the ground.  Sapp suffered multiple gunshot wounds.  Paramedics transported her to the hospital.

Williams fled the scene in Sapp’s red 2013 Hyundai Sonata, which was recovered (with the keys inside) at her apartment complex on Monday (July 19).

Anyone with information on the whereabouts of Rashad Williams is urged to contact the HPD Major Assaults & Family Violence Division at 713-308-8800 or Crime Stoppers at 713-222-TIPS. 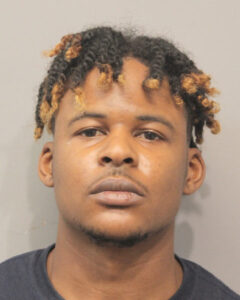