Charges have been filed against a suspect arrested in the fatal shooting of a man at 8811 Gustine Lane that occurred about 10:30 p.m. on Monday (September 7).

The suspect, Ofon Phillip Idiong (b/m, 22), is charged with murder in the 337th State District Court.  A booking photo of Idiong is attached to this news release.

The victim, Brian Njoku, 22, was transported to Memorial Hermann Hospital where he was pronounced deceased.

HPD patrol officers responded to a shooting call at the above address and found Mr. Njoku suffering from gunshot wounds.  When officers arrived a security guard from the apartment complex was administering first aid.

The security guard stated that prior to the shooting Njoku and another man were overhead arguing in front of the apartment.  The suspect, Idiong, initially fled the scene, however he returned, was interviewed by investigators, and subsequently charged for his role in Njoku’s death. 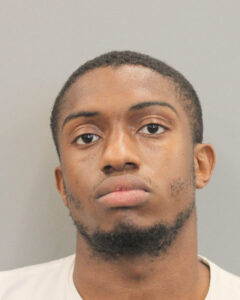