Need for Continued Investment in Resilience 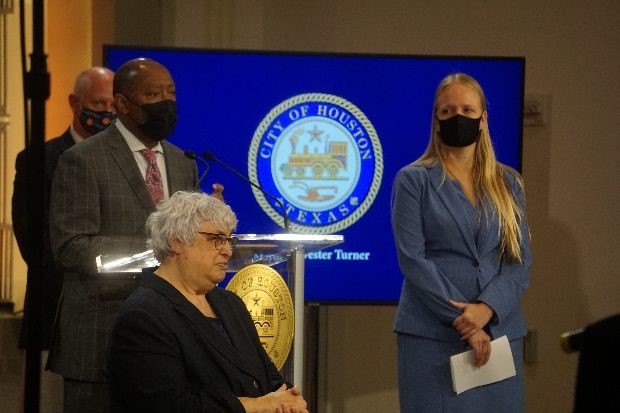 The recent winter storm and cascading infrastructure failure is another reminder that our most vulnerable people, places, and systems are disproportionally affected by disasters. Today, Mayor Sylvester Turner and Chief Resilience Officer Marissa Aho released the one-year report for the Resilient Houston strategy.

“Every action we take and investment we make should continue to improve our collective ability to withstand the unexpected shocks and disruptions when they arrive — from hurricanes to global pandemics, to extreme heat or extreme cold,” said Mayor Sylvester Turner. “The time is now to stop doing things the way we’ve always done them because the threats are too unpredictable. The Resilient Houston One Year Report shows great progress, especially for 2020, but we are just getting started. We need to invest in resilient infrastructure, we need to prepare our neighborhoods to withstand climate extremes, and we need to support all our neighbors so they can thrive.”

Resilient Houston was released in February 2020 after a multi-year planning and engagement process that began when Houston was selected to join the former 100 Resilient Cities program through a $1.8M grant from Shell in August 2018, at the one-year anniversary of Hurricane Harvey. In two and a half years, Houston hired a Chief Resilience Officer, developed and launched Resilient Houston, and now, one year later is formally reporting on its progress implementing the strategy through the one-year report. In September 2020, Mayor Sylvester Turner also became the Chair of the Board of Directors of Resilient Cities Network, the city-led organization that was created after 100 Resilient Cities program ended.

“The City of Houston’s progress on its Resilient Houston strategy has been remarkable, especially during an unprecedented year,” said Jason Klein, Shell VP US Energy Transition Strategy. “We look forward to fully realizing the plan’s critical ambitions and helping forge Houston’s future as a sustainable, innovative, and resilient global energy hub.”

The city has also collaborated with Rice University’s Kinder Institute to launch a Resilient Houston target tracker, which will continue to report on the progress of Resilient Houston and Houston Climate Action Plans 27 combined targets.

“The Kinder Institute recognizes the importance of tracking progress on major, multi-year effort such as Resilient Houston. But beyond tracking, it’s critical that we also make information about that progress available in a way that all residents can understand and recognize,” said Kyle Shelton, deputy director at Rice University’s Kinder Institute for Urban Research. “We are glad to help the City of Houston report on the efforts toward achieving the goals laid out in Resilient Houston as a part of the broader effort to study and improve disaster recovery in our region.”

The One Year Report also highlights the 24 Department Resilience Officers that have been appointed to work with the City’s Chief Resilient Officer to lead and coordinate the implementation of Resilience Houston in accordance with the Executive Order signed by Mayor Turner on February 12, 2020.

“Building internal capacity within all of the City’s Departments to implement Resilient Houston is a critical component of seeing transformational change in our communities,” said Chief Resilience Officer Marissa Aho. “This year, we look forward to expanding partnerships that will build additional external capacity to accelerate further the progress that we achieved this year.”

City of Houston – Mayor’s Office of Resilience
The Mayor’s Chief Resilience Officer leads the city’s resilience efforts, including the development and implementation of the Resilient Houston strategy, launched in February 2020. Resilient Houston is focused on building resilience at every scale and is organized into five chapters, 18 goals and targets, and 62 actions. Each chapter identifies actions for increasing the resilience of Houstonians, neighborhoods, bayous, the city and the region. The vision for a more resilient Houston is a healthy place to live, an equitable, inclusive, and affordable city, a leader in climate adaptation, a city that builds up, not out, and a transformative economy that builds forward. For more information about Houston’s resilience program, visit https://www.houstontx.gov/mayor/chief-resilience-officer.html.

Rice University’s Kinder Institute for Urban Research
The Kinder Institute for Urban Research is a multidisciplinary think-and-do tank housed at Rice University, focused on urban issues in Houston, the American Sun Belt and around the world. Through informed research, data, and policy analysis, the Kinder Institute hopes to engage civic and political leaders to implement solutions to critical urban issues, including education, governance, housing, mobility and transportation, resilience, and demographics. Visit https://kinder.rice.edu/.