Mayor Sylvester Turner set the course for further city improvements and advancements on multiple fronts Thursday as he, City Controller Chris Brown and City Council members took their oaths of office in an inauguration ceremony that sparkled with multi-cultural entertainment and prayer reflecting the city’s unique diversity. 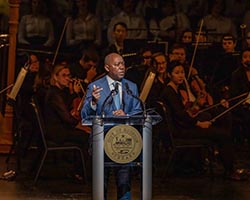 In his inauguration speech, the mayor outlined initiatives for his second term to expand street repairs beyond the 250,000 potholes filled in his first term; involve non-profits and corporations as financial partners in further reduction of homelessness; carry out newly funded flood mitigation projects; debut the final version of the city’s first climate action plan, improve neighborhood parks through a private-public partnership; further expand the city’s digital innovation economic sector; continue work through his Complete Communities initiative toward equitability for under-served neighborhoods; and more.

“The best for Houston has yet to come,” the mayor said.

The ceremony included prayers by Christian, Muslim and Jewish clergymen and performances of classical, rap, mariachi and gospel music. 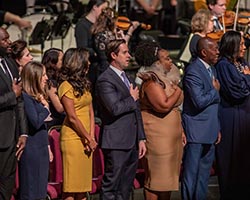 Except for District B Council Member Jerry Davis, who remains in office until a delayed runoff election produces his successor, each official was sworn into office for a four-year term. The District B runoff will complete a 16-member council with nine new members and, for the first time, a majority of women.

After the ceremony, the new council confirmed District E Council Member Dave Martin as mayor pro tem and Council District K Member Martha Castex-Tatum as vice mayor pro tem. Their duties will include representing the mayor when he is absent. 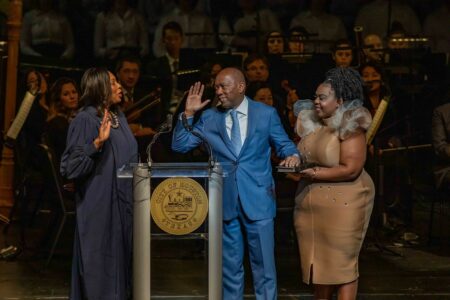 U.S. District Judge Vanessa D. Gilmore administers the oath of office Thursday to Mayor Sylvester Turner as he rests a hand on a Bible held by his daughter, Ashley P. Turner.

Photos on this page by Richard J. Carson.