Houston Mayor Sylvester Turner welcomed His Highness the Aga Khan to Houston today in commemoration of his Diamond Jubilee, which celebrates his 60th anniversary as spiritual leader of the Shia Ismaili Muslims. 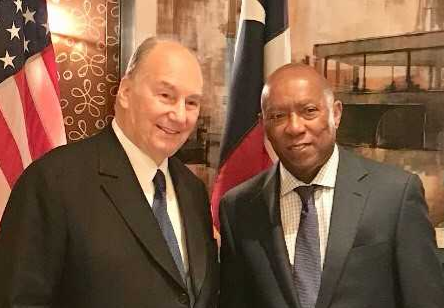 “It is my honor and pleasure to welcome His Highness the Aga Khan back to Houston, a city that strives to exemplify the ethics he professes, such as self reliance, education and research, compassion and sharing, inclusiveness, pluralism and the nurturing of a sustainable environment,” Mayor Turner said. “His Highness the Aga Khan’s presence for the Diamond Jubilee highlights the vibrancy of the Ismaili Muslim community that so often ‘gives back’ to our city."

The mayor issued a city proclamation announcing March 18, 2018 as The Diamond Jubilee of His Highness the Aga Khan Day. In the proclamation, the mayor recognizes the Aga Khan’s and the Ismaili community’s “significant contributions to improving the quality of life of Houstonian’s over many years, and in the wake of Hurricane Harvey, was a source of inspiration.”

"The Ismaili community deeply appreciates the City of Houston and its leadership for its continuous support and friendship in facilitating dialogue and programs to create a truly pluralistic society," said Dr. Barkat Fazal, President of the Aga Khan Council for the United States. "Guided by our ethic of service, we are pleased to partner with the City to make Houston an amazing place for its citizens to live now and into the future."

In the context of his hereditary responsibilities, the Aga Khan is the founder of the Aga Khan Development Network (AKDN), one of the most comprehensive development networks, working in over 30 countries to uplift the lives of most vulnerable. The AKDN develops institutions and programs in close partnership with public and private organizations, including governments, companies, foundations, and universities, towards a common goal of responding to the challenges of social, economic and cultural change on an on-going basis.

His Highness the Aga Khan leads a global community of Shiah Ismaili Muslims, living predominantly in South Asia, Central Asia, Africa, the Middle East, Europe, North America, and the Far East. Like the Muslim world as a whole, the Ismaili community represents a rich diversity of cultures, languages and nationalities. His role as imam includes the interpretation of the faith for his community and responsibility for religious institutions and his followers worldwide. More information is available at https://the.ismaili.