Earlier today, Mayor Turner made an impromptu stop at the anti-SB 4 rally organized by United We Dream - Houston and the Texas Organizing Project in front of Houston city hall. The mayor assured the crowd he would continue to stand with the community during this time and in the future. 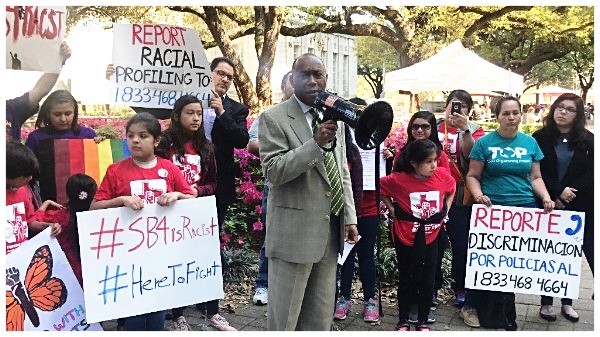 “Tuesday’s decision by a three-judge panel on the United States Court of Appeals for the Fifth Circuit is disappointing. If Senate Bill 4 remains law, it will continue to unnecessarily harm relationships among police and citizens, as well as create unnecessary fear of law enforcement within certain communities. The law would subject anyone to being stopped and require them to “show their papers” upon the demand of any local law enforcement official.

"It remains my position that the Houston Police Department is not U.S. Immigration and Customs Enforcement and HPD should not function as an arm of ICE. Houston Police officers should not be required to question the citizenship status of anyone they arrest or turn information over to federal immigration officials.

"On June 21, 2017, city council voted to join Austin, Dallas, San Antonio, and several other local governments in a lawsuit to end SB-4.

"Tuesday’s court’s decision does not end the litigation and I expect the parties to appeal.”