Mayor Sylvester Turner and First Daughter Ashley Turner presented Houston native and Grammy – nominated artist Travis Scott with a key to the City of Houston during the “Astroworld – Wish You Were Here” sold out concert at the Toyota Center last night.

“Travis is a native son of Houston, who is beloved and respected by his peers and fellow Houstonians, Mayor Turner said. “He has been a great ambassador for art, education and youth initiatives in the City of Houston, and he is a strong advocate and supporter of our great city.” 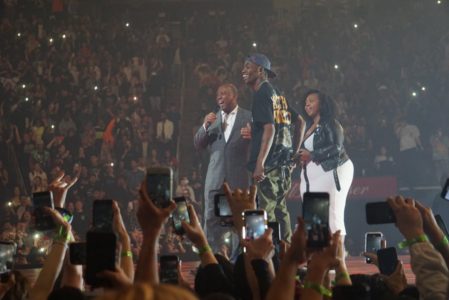 Earlier this month, Travis Scott earned critical acclaim for his performances during the Super Bowl LIII halftime show and the 61st annual Grammy Awards Show. As part of his agreement to perform in the Super Bowl, Scott negotiated with the NFL to donate $500,000 to Dream Corps which is a leading social justice organization.

A supporter of the mayor’s Complete Communities initiative, Travis Scott has contributed more than $200,000 to three low income neighborhoods within the Complete Communities. Beyond his financial generosity, Travis has been a vocal champion of civic engagement among young people and millennials.