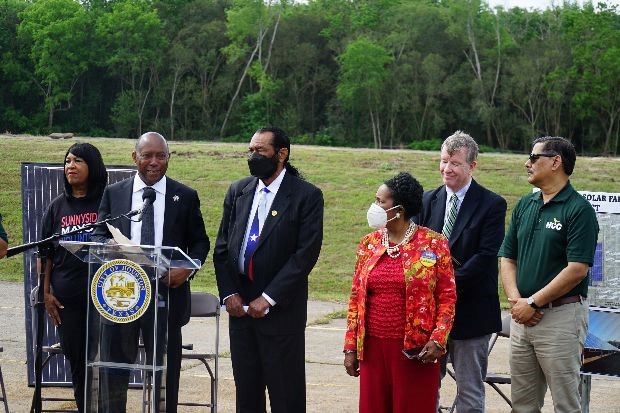 The project will transform a 240-acre former landfill that has sat dormant for more than five decades into a solar power farm that will provide renewable power sources - enough energy to power from 5,000 to 10,000 homes. The area is located on Bellfort Street, a major commercial corridor in Sunnyside and near Sunnyside Park, across the street from Young Elementary School.

Once completed, it will be the largest urban solar farm in the nation built on a landfill and will take an estimated 120 million pounds of carbon out of the air each year and create jobs.

“I am optimistic about the future of this land and the people who live in the resilient neighborhood that developed around this environmental injustice,” said Mayor Turner. “Most importantly, it will transform the built environment of a historically under-served and under-resourced community by bringing private investment to Sunnyside, a predominantly Black and brown community that struggles daily with historical inequities that have created present-day disparities.”

The Sunnyside Solar Farm project results from the public-private partnership structured by the Mayor’s Offices of Resilience and Sustainability, Complete Communities, and Economic Development and the ongoing collaboration between the private sector, the community, and city and state agencies.

“I salute Mayor Sylvester Turner for leading the remarkable effort to transform a former landfill into the largest urban solar farm in our nation and improve the lives of Houstonians. His continuous support and determination to see this project through was crucial in my ability to secure $750,000 in federal funds for the EmPowering Solar Jobs Program," said U.S. Rep. Al Green (D-9). "This EmPowering Solar Jobs Program is a workforce development initiative that is part of the Sunnyside Solar Farm project. These federal funds will be used to provide STEM career opportunities for Houstonians in the solar technology sector. It allows them to be trained and certified as installers, maintenance technicians, and constructors of solar panels and related technologies. The average advertised salary for entry-level STEM jobs requiring a BA or higher is $66,123 compared to $53,299 for non-STEM jobs, which is around a $14,000 difference, representing a 26% premium. I look forward to continuing my partnership with the City of Houston and the Sunnyside community to continue to uplift underserved communities and combat climate change."

The project will create more than 100 construction and green job opportunities. The earmark secured by Rep. Green aims to train and place 175 Houstonians through Houston Community College and Lone Star College, creating opportunities for students from Sunnyside and other Complete Communities neighborhoods for solar and solar-related jobs by September 2023.

“We used an environmental justice lens to reimagine this landfill. And we made equity the central and most critical component of our site redevelopment plans for Sunnyside. Another example is the new Sunnyside Multi-Service and Health Center under construction now,” said Mayor Turner. “I look forward to pushing forward the work that will allow all Houstonians, especially the residents of Sunnyside, to benefit from this project.” 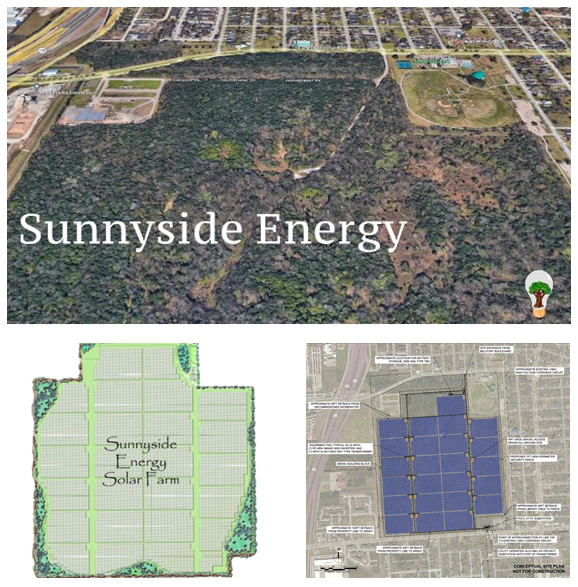