During the official grand opening of a state-of-the-art recycling facility today, Mayor Sylvester Turner announced the return of curbside recycling of bottles and jars made from clear, green and brown glass.

The resumption of curbside glass recycling after a two-year pause is made possible by the city’s new recycling contractor, Fomento de Construcciones y Contratas, Inc. (FCC), which built the recycling facility in northeast Houston. 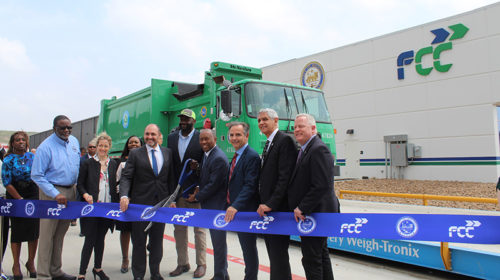 “I promised residents we would bring glass containers back to curbside recycling bins and I kept that promise,” Mayor Sylvester Turner said. “My thanks go to residents for their patience, to City Council for approving the FCC contract in 2018 and to Director Harry Hayes and his team at Solid Waste.”

Glass, along with other items accepted in the recycling cart – paper, cardboard, aluminum, tin cans and plastics — should be clean, dry and empty before recycling. The FCC facility opened in March and has a 145,000 ton per year capacity, which is more than double the current needs of the City.

“Today we were able to show the world that the commitment made by FCC to the City of Houston and to the residents of Houston has come to fruition,” said Inigo Sanz, FCC Environmental Services USA CEO. “The MRF, a colossal facility at 120,000 SF, is already open and processing residential materials. Thank you to the Mayor and the rest of the Houston that believed in creating a facility fit for the future.”

“We are so proud to have officially opened the Houston MRF. This milestone is the first of many to come from our partnership with our home, the City of Houston,” said Pablo Colio, FCC Group CEO. “We will continue our commitment to the City, education and the local communities, because a greener future matters to all.”

For non-curbside customers, glass continues to be accepted at the City’s Recycling Drop-Off Centers listed below.

The City’s partnership with FCC also represents a reduction in the cost of Houston’s recycling program. The new contract shares the financial risk between the City and FCC, so that the City can limit its liability when the value of recyclables declines and share in revenue when it rises. The entire facility and plant ownership are transferred to the City; however, FCC will be responsible for operations and maintenance and the liability of the entire plant for the duration of the contract.

During the course of negotiations, the city worked hard to come to an agreement for Houston that at no time will the cost per a ton of recycled material exceed the cost per a ton of disposal to the landfill. Mayor Turner said the City and FCC look forward to working together to grow our recycling program – improving the quality of the material, preserving our valuable landfill space, and protecting Houston’s environment for the long term.

The overall goal for involvement in the plant project by minority-owned businesses, women-owned businesses and small business was 11%. FCC reached 100% for design work and 33% on the construction phase.

Mayor Turner announced FCC will provide job opportunities for “second chance” and homeless residents. Half of the workers on the sorting staff are in the second chance category.