August 30, 2022 -- The City of Houston and Bun B’s Trill Burgers are proud to share more details on the upcoming burger pop-up at Houston City Hall on Sunday, Sept. 18.

Hosted at Houston City Hall (901 Bagby St, Houston, TX 77002) in downtown Houston from 3-7 p.m. on Sunday, Sept. 18, the pop-up will feature Trill Burgers’ full menu, including the OG Trill Burger, Grilled Onion Burger, Vegan Smashburger, and seasoned fries, with burgers for sale on a first-come, first-served basis until they sell out. 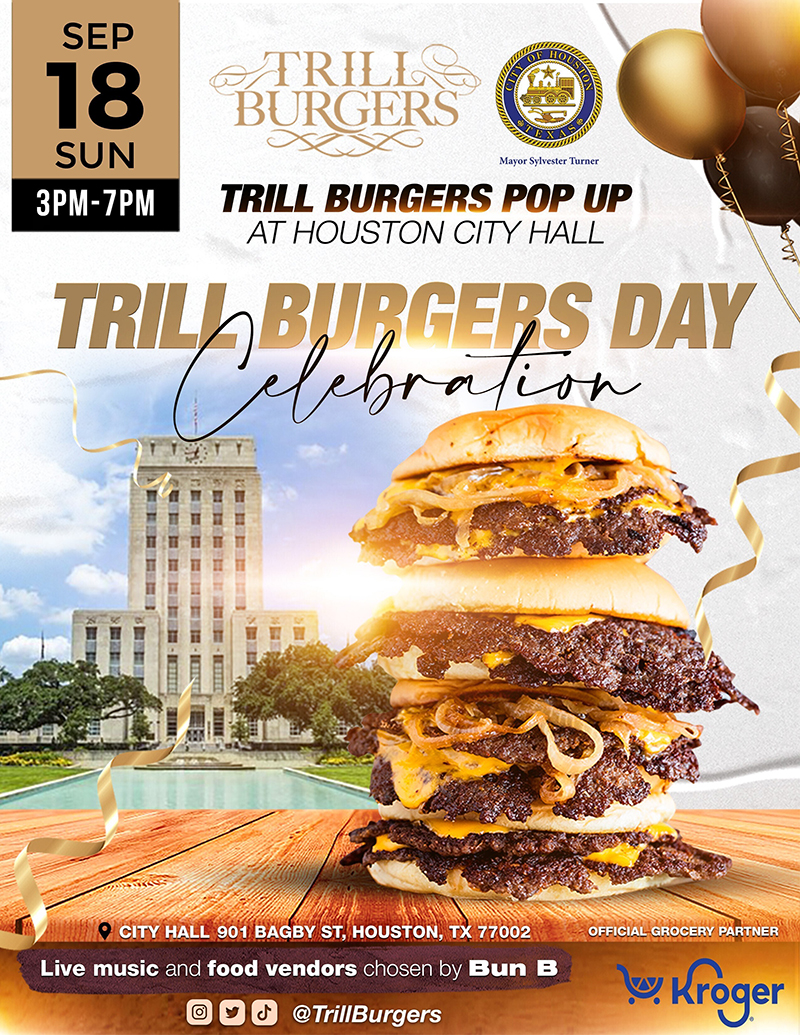 This Trill Burgers pop-up will take place just weeks after the City of Houston’s own official Bun B Day (Aug. 30), first proclaimed in 2011. The day was set aside to celebrate the impact that the musician/entrepreneur continues to have on the region, from his days with the influential rap duo UGK to championing Houston’s vibrant city culture across the world.

"I invite everyone to join us for a Trill Burger experience and have some fun. We are excited about partnering with Bun B, whose music and award-winning burger are respected across the country," said Mayor Sylvester Turner. "Not only is he a founding father of Southern hip hop, but his time as a professor at Rice University and his constant outreach to the community should make every Houstonian proud."

Working in conjunction with the City of Houston, the city hall event promises a family-friendly afternoon picnic environment with Trill Burgers complemented by some of Bun B’s favorite local Houston food concepts. Some of those include Boutte BBQ, Captain Ceviche, Rick’s Seafood, Fluff Bake Bar, and Kicpops. There also will be special guest musical performances from hip-hop act Buddie Roe and country artist Rich O’Toole.

“I’m always excited when I can celebrate my personal and professional accomplishments with the city, and this Trill Burgers pop-up at City Hall is designed to do just that,” Bun B said in a statement. “Thanks to Mayor Turner, we are planning a great day with local Houston vendors and music just for you, H-Town.”

Kroger will be the Official Grocery Partner of the event, with activities for the whole family, including a game zone, hydration stations, cooling tents, free food samples, and activities for kids in attendance, including balloon artists and face painting.

"Kroger is a proud supporter of local businesses and nonprofits," said Teresa Dickerson, Kroger's corporate affairs manager for the Houston region. "We believe this is a great way to live our purpose, feed the human spirit, and uplift the communities we serve."

Trill Burgers won the title of the best burger in America from "Good Morning America" in July, capping a weeklong competition against concepts from across the United States. Since launching in Houston with pop-ups in 2021, Trill Burgers has been a certified smash at music festivals around the country, including Rock The Bells, Rolling Loud, Something in the Water, the Coachella Valley Music and Arts Festival, and RodeoHouston. Trill Burgers hosted a pop-up on Aug. 14 at 8th Wonder Brewery, drawing more than 1,500 guests with a line that started at 8:45 a.m., more than three hours before the pop-up started at noon.

About Trill Burgers
Trill Burgers is a smashburger concept owned by Bun B (Bernard Freeman), restaurateur Andy Nguyen and publicist Nick Scurfield. Launched in Houston in 2021 with a series of pop-ups, Trill Burgers features an OG Trill Burger with 44 Farms Texas beef, Trill Sauce and pickles; Grilled Onion burger with caramelized onions; and a vegan smashburger. . It has become a fixture at major events across the country and has been a hit with celebrities including Snoop Dogg, Busta Rhymes, Ken Griffey Jr., and James Harden. www.trillburgers.com.