March 23, 2022 -- To celebrate the two-year anniversaries of both the Resilient Houston strategy (released February 2020) and Climate Action Plan (released April 2020), the City of Houston has released a two-year, combined update and a new digital interface to track progress on ongoing initiatives.

“I am proud to report on the progress of our last two years for both resilience and sustainability. We have taken strides, despite the challenges and roadblocks that Houstonians have faced. It is yet another demonstration of our resilience as a city,” stated Mayor Turner. “With 3 out of 18 targets completed in Resilient Houston and 3 out of 12 targets completed for the Climate Action Plan, I have no doubt that we are positioning Houston as a leader in resilience and demonstrate our commitment to build forward and build better”.

Resilient Houston and the Climate Action Plan helped cement the foundation for the Mayor’s vision of making Houston into a more resilient and sustainable city. Built on existing efforts, the plans recommend new programs, projects, and policies that will help Houston prepare, adapt, and recover from shocks and stresses—like the COVID-19 pandemic, extreme weather, systemic inequities, and more. The plans outline specific actions for the City, partners, and communities to come together and solve our city and region’s challenges together, with an emphasis on the most vulnerable populations.

“What makes these plans different from other efforts is the focus on implementation,” said Priya Zachariah, Houston’s Chief Resilience and Sustainability Officer. “We intentionally worked across departments as well as with the community and partners to develop measurable goals and targets that allowed us to track progress to make a difference and transform the city.” 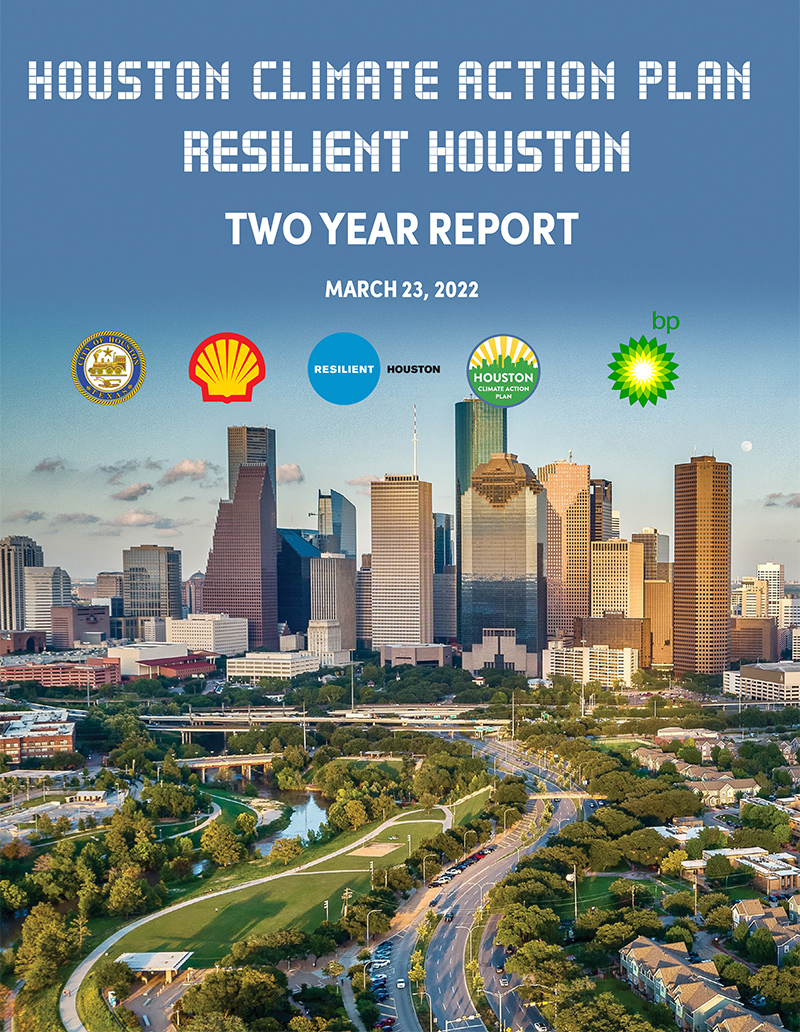 In October of 2021, Mayor Turner merged the two City offices – Resilience and Sustainability – to align endeavors and identify the most expeditious paths to deliver on the City’s goals. It is one of the first combined offices that exist in the nation that bring both portfolios together. To date the following targets have been completed:

The two-year combined report outlines goals and targets, but also provided a web-interface to dive into the details of each target. This was accomplished through the partnership with the Kinder Institute.

For more questions on the two-year report or to take part in the implementation of both plans, please contact the Mayor’s Office of Resilience and Sustainability.

About the Mayor’s Office of Resilience and Sustainability
The Mayor’s Office of Resilience and Sustainability is responsible for implementing Resilient Houston and the Houston Climate Action Plan (CAP). Together, these documents provide a clear framework to foster the growth of a Houston that is both a healthy place to live, as well as an equitable, inclusive, and affordable city that leads in climate mitigation and adaptation and offers a transformative economy that builds forward. To learn more about the CAP or Resilient Houston, visit www.greenhoustontx.gov.