Luci Baines Johnson is a daughter of LBJ, the son of a central Texas tenant farmer who rose from a hard-scrabble childhood to the White House, leaving an early mark on Houston as a public high school teacher and debate coach in the early 1930s.

The privately funded monument in Little Tranquility Park at Bagby and Capitol streets will feature an 8-foot bronze sculpture of LBJ, created by renowned American artist Chas Fagan, surrounded by a semicircular wall featuring important quotations from Johnson’s presidency during the turbulent 1960s. The Houston-based global design firm Gensler is the lead architect and designer of the project.

In a somber connection to Johnson’s legacy, the park contains magnolia trees planted in memoriam to the astronauts killed in the two Space Shuttle disasters, Challenger in 1986 and Columbia in 2003. Johnson ensured that NASA’s Manned Space Center would be located in Houston. It was named the Johnson Space Center in 1973 in memory of LBJ.

New bench seating and walking paths along the semicircular wall will be incorporated to guide visitors through the redeveloped park space leading towards the monument.

The monument will be located within easy walking distance of a statue of the late President George H.W. Bush, a longtime Houston resident, at Bagby and Franklin streets.

The project is scheduled for completion in 2020.

“The LBJ monument and surrounding features will be a tourist attraction, a history lesson, an inspirational gathering place and a testament to how persistence and dedication of one person can change the course of our city, state, nation and the world,” Mayor Turner said. “In Houston we recognize our debt to great presidents without regard to political affiliation, but we do prize highly respected late presidents who spent formative years right here in our city.”

The Brown Foundation of Houston made a $250,000 matching grant to start the capital campaign to fund the project. Since then, the Cullen, HEB, Hobby and Sarofim Foundations have provided major support along with major other donors.

“The monument is in recognition that a former Houstonian high school teacher is regularly ranked by presidential historians as one of the ten greatest Presidents in U.S. history,” said Foster, co-chair of the LBJ Presidential Monument Advisory Board. “LBJ passed more significant legislation than all of his successors together, including the three major Civil Rights bills that accomplished the efforts of President Abraham Lincoln and Ulysses S. Grant to bring full legal rights to all Americans, and the 1965 Immigration Act that made it possible for immigrants to legally immigrate from China and India.”

In May 2018, Foster, chairman of Foster LLP, a global immigration law firm, and David B. Jones, CEO of the George Bush Presidential Library Foundation, announced the city agreed the monument would be located on the block of land bound by Capitol, Walker, Bagby and Smith streets. Adjacent to the park, the city of Houston will begin improvements of Bagby Street in 2020 to create a wider, more pedestrian-friendly sidewalk, bike lane and green space.

“Houston dates back to 1836 with its own rich history that is worth remembering and celebrating,” said, CK Pang, retired principal of Gensler’s Houston office. “This monument will not only serve in honoring LBJ’s great contributions to our city and nation,  but will also provide a chance to connect neighboring monuments and downtown landmarks in a new way for Houston residents and visitors to experience for decades to come.” 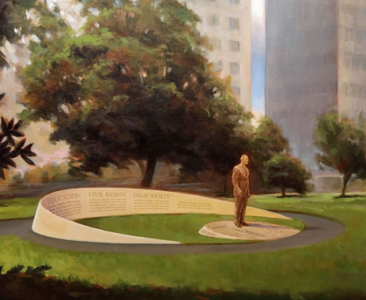