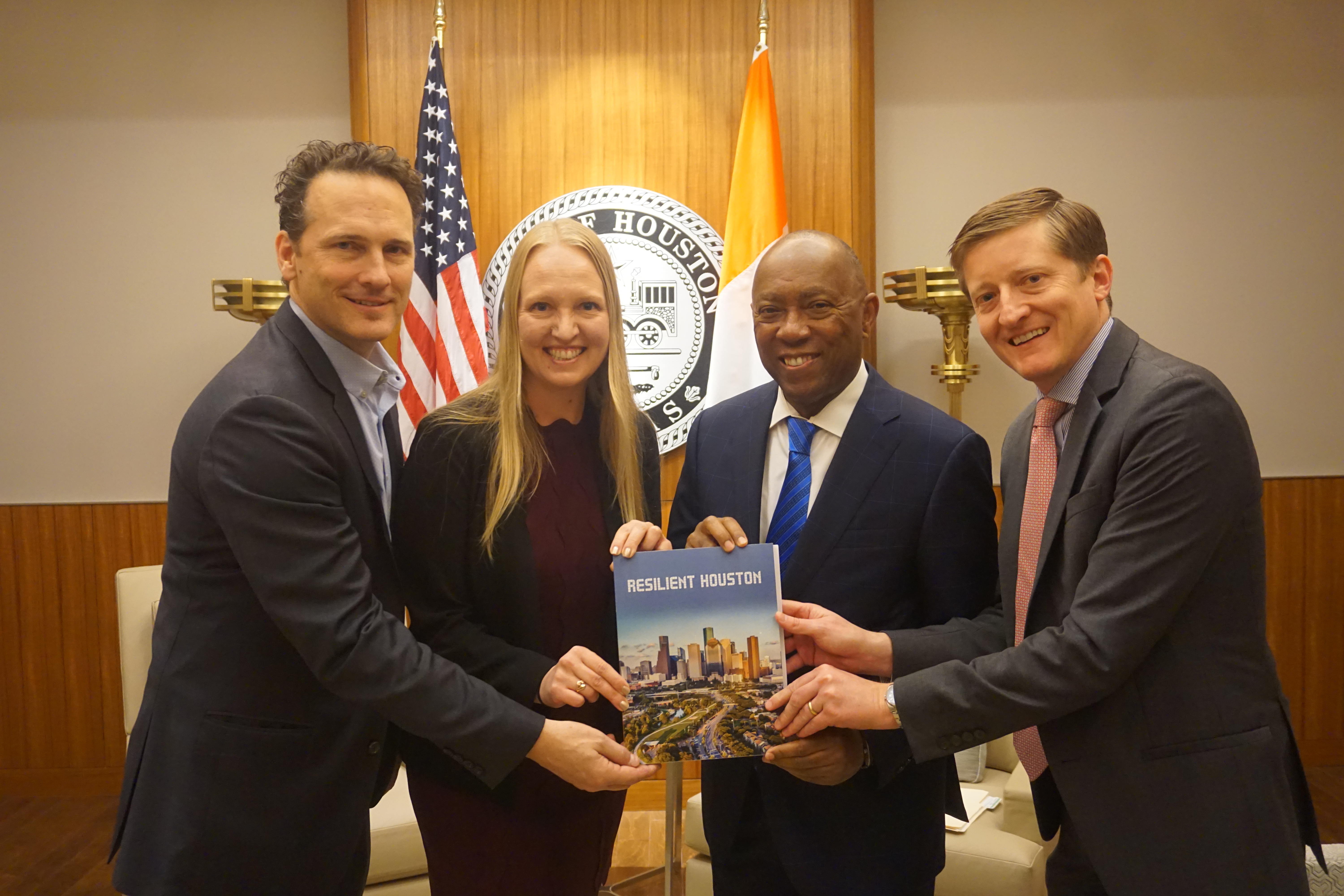 “Our efforts need to be bold, transformative, and aligned to achieve the outcomes Houstonians deserve,” said Mayor Sylvester Turner. “Resilient Houston is a framework for transformative change that comes from thinking and acting together to build and grow Houston’s long-term resilience. We will need our partners and every Houstonian at the table to achieve this vision.”

Resilient Houston is a framework for collective action and links existing efforts with new ones that will work collectively to protect Houston against future disasters—from hurricanes and flooding to extreme heat waves—and chronic stresses such as aging infrastructure, poor air quality, and climate change. The strategy frames five key Visions for Houston’s future along with 18 goals and 62 actions describing the path forward, timeframe, partners, implementation opportunities, and corresponding U.N. Sustainable Development Goals. Resilient Houston was forged during an 18-month process in collaboration with local stakeholders and regional, national and global partners.

Houston has experienced devastation and loss from six federally-declared flooding disasters in the past five years, most notably Hurricane Harvey in 2017. Resilient Houston will help to mitigate flooding risk and improve climate readiness. Additionally, Greater Houston’s continued population growth, with more than 100,000 new residents moving to the region each year, is aided by relative affordability and a strong job market. But while Houston’s job market grew by 19% between 2008 and 2017, income inequality grew by 16% during the same time period. Improving equity and inclusion while maintaining a strong economy also drove many of the actions in Resilient Houston. 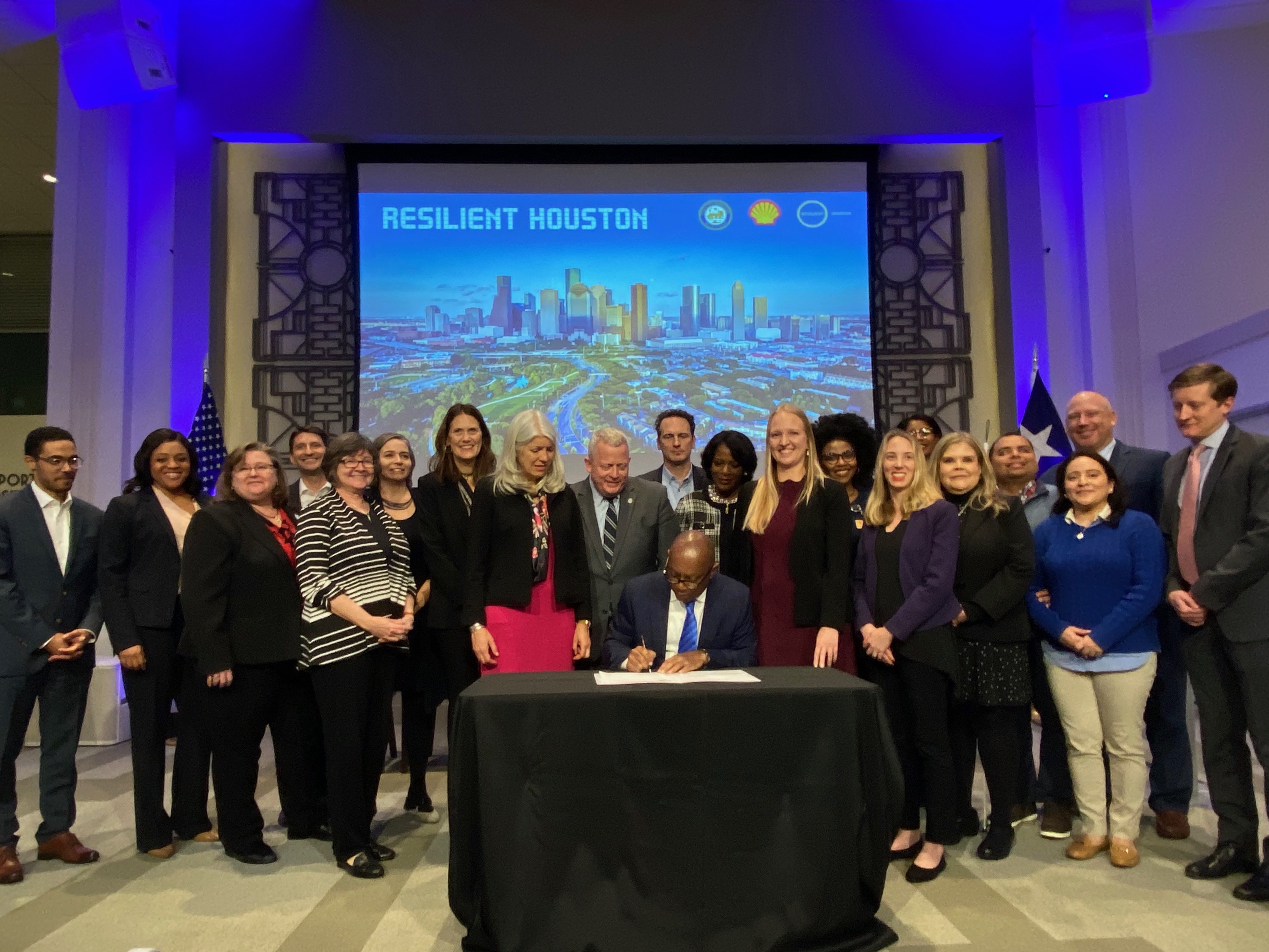 “The release of Resilient Houston is a pivotal milestone in resilience-building efforts after Hurricane Harvey, but there is much more work to do,” said Chief Resilience Officer, Marissa Aho. “Today is the beginning of implementing this ambitious, yet achievable, framework for resilience. I want to thank the hundreds of partners who contributed to this effort at workshops, in working groups, and one-on-one. I encourage every Houstonian to play a role in increasing our collective resilience.”

Resilient Houston is focused on building resilience at every scale and is organized into five chapters. Each chapter identifies aspirational goals and specific actions for increasing the resilience of Houstonians, our neighborhoods, our bayous, our city, and our region. Resilient Houston sets 18 high-level targets, corresponding with the strategy’s 18 goals  that will be used to measure the progress and impact of the city’s resilience work:

Chapter 1:  Prepared & Thriving Houstonians
Making Houston more resilient begins with supporting Houstonians with tools and resources to be resilient as individuals. Our collective resilience improves when all Houstonians have the capacity to prepare for and adapt to an increasingly uncertain future, have access to employment and wealth-building opportunities, and enjoy a safe and healthy quality of life.

Chapter 2:  Safe & Equitable Neighborhoods
Each of Houston’s 88 super neighborhoods has different resilience priorities, including flooding, air quality, displacement, and mobility. These challenges are best addressed by developing and implementing place-based solutions at the neighborhood scale.

Chapter 4: Accessible & Adaptive City
The City of Houston will lead by example to further embed climate readiness, equity, inclusion and resilience into all City policies and practices.

Chapter 5: Innovative & Integrated Region
By taking a regional approach to building resilience, we can extend the benefits of resilience planning to more communities while including additional partners who increase our capacity to meet these goals.

Today, Houston becomes the 79th city in the world, and the third Texas city after Dallas and El Paso, to develop and release a resilience strategy. All these cities continue the expansion of the original work of 100 Resilient Cities, which has now evolved into the Global Resilient Cities Network (GRCN), with ongoing support from the Rockefeller Foundation and other partners. The City of Houston has supported the work of the city-led GRCN through the transition, serving on the interim CRO Global Steering Committee since its formation.

“It is truly an exciting moment for the city of Houston and for the Global Resilient Cities Network, and we are thrilled to be here with Mayor Turner, CRO Marissa Aho and the whole Houston team to celebrate this milestone,” noted Stewart Sarkozy-Banoczy, Managing Director for North America and Global Strategic Partnerships Lead at GRCN. “Houston has carried on an impressive process in the creation of the strategy as the 101st city to join the network in the previous phase, and now the range of deep infrastructure, economic mobility, and equity projects reflect a future-proofing that all residents can be proud of.”

Houston became a member of 100 Resilient Cities — pioneered by The Rockefeller Foundation — in August of 2018, the one-year anniversary of Hurricane Harvey. This membership was made possible through a $1.8 million sponsorship from Shell Oil Company (Shell).   In its sponsorship of Houston to develop Resilient Houston, Shell became the first local sponsor of a city.

“The launch of Resilient Houston is a critical next step in ensuring Houston remains a global energy hub long into the future,” said Jason Klein, Shell VP US Energy Transition Strategy. “Progressing Houston’s climate and economic resilience goals demonstrates a clear commitment to being a leader through the energy transition.”

For more information and to read Resilient Houston go to https://www.houstontx.gov/mayor/chief-resilience-officer.html

About GRCN
The Global Resilient Cities Network (GRCN) is the city-led organization that will drive urban resilience action to protect vulnerable communities from climate change and other physical, social and economic urban adversities and challenges. With support from The Rockefeller Foundation and other funding strategic partners, the Network aims to continue supporting cities and their Chief Resilience Officers in future-proofing their communities and critical infrastructure with a unique reach, strength and legacy to understand and support the challenges of the ever-growing urban society.