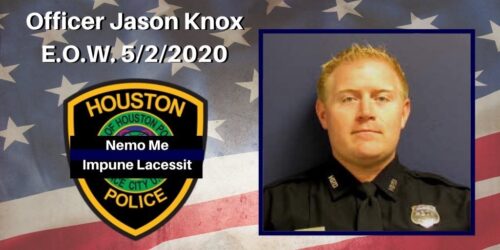 Knox died early Saturday morning when the police helicopter he was in crashed near a Greenspoint apartment complex. The pilot, Senior Police Officer Chase Cormier, survived the crash and is recovering at Memorial Hermann Hospital following surgery.

“The City of Houston is heartbroken following the tragic death of HPD Officer Jason Knox. He was a dedicated public servant who inspired his fellow officers and worked to build meaningful relationships throughout the community.

“Officer Knox lived each day to the fullest and died while performing his passion, working as a member of the HPD Air Unit, and keeping our city safe.

“I had the pleasure of meeting Jason on several occasions through his father’s work on the Houston City Council. I know Mike and Helen Knox were proud of their son and will miss him dearly. I want to express my deepest condolences to the family as they grieve the loss of a beloved son, husband, father, and friend.

“I also thank the Houston Fire Department, the crew of Life Flight, and Memorial Hermann Hospital doctors and nurses for their brave work to save the officers.

“I ask our city to join me in praying for the Knox and Cormier families. May God bring comfort in their time of grief and strength to the men and women of the Houston Police Department.”