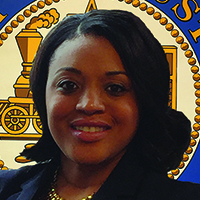 Murray is currently the Chief Administrative Officer for the City of Houston’s Legal Department. She is responsible for strategically managing its operational and administrative needs to enhance the delivery of quality legal services.

From April 2012 to March 2019, Murray served as OBO’s Deputy Director.  While at OBO, Murray played an instrumental role in the department’s growth and  led comprehensive operational changes and policy updates in the department.  Murray also led the expansion of OBO’s services to facilitate free legal assistance and guidance for Houston’s small business community doing business globally.

In February 2019, Murray received OBO’s Advisory Board Chairman’s Advocate of the Year award for her work on behalf of Houston’s business community.

Prior to joining the City of Houston, Murray served as legal counsel to New York City government for 10 years.  During that time, she worked to ensure that the most vulnerable New Yorkers had access to social services and led programs that served to maximize housing options for citizens in a perpetually challenging housing market.

“Marsha Murray’s experience and success working with the business community is the kind of leadership the Office of Business Opportunity needs to continue providing economic opportunity and workforce inclusion in the city of Houston,” Mayor Turner said. “Since I’ve been mayor, Houston has awarded nearly $1.4 billion in City of Houston contracts to MWBEs (Minority & Women Business Enterprises). I expect that level of commitment to continue.”

Murray has a Bachelor of Arts degree in Political Science and Spanish from Colgate University and a Law degree from Villanova University School of Law. Murray is active in the local community and serves on the board of Zonta Club of Houston, a global organization of professionals empowering women worldwide through service and advocacy.

She is a graduate of the Center for Houston’s Future Business/Civic Leadership Forum and has served as an advisory board member of the World Chamber of Commerce.  She has served on national and international panels advocating for the continued support and development of small businesses. Her advocacy for businesses to thrive globally has led her to earn a National Association of Small Business International Trade Educators Certified Global Business Professional designation.

OBO Director Carlecia Wright submitted a letter of resignation to Mayor Turner to pursue a position in the private sector. Her resignation is effective Friday, August 30.