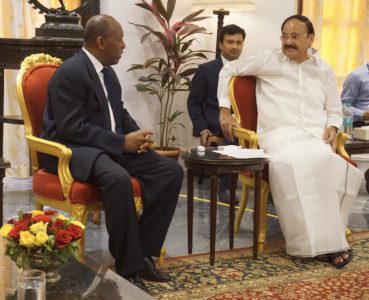 “The connection between India, which has the world’s fastest growing economy, and the United States was labeled by President Obama as the defining relationship of the 21st century. Houston is now a trend-setter for nurturing this relationship as the result of our trade mission,” Mayor Turner said. “I have no doubt that our business and diplomatic meetings in India will lead to more jobs, wealth, and cultural enrichment in Houston as well as in the emerging sectors of what will soon be the world’s most populous nation.”

Establishing non-stop commercial airline service between Houston and India was among the main focuses of the Nov. 9-17 trip to New Delhi and Mumbai by about 30 business and government officials.

“I’d be very happy if this moves forward very fast,” India Minister of Tourism K.J. Alphons said of the quest for direct flights in a meeting with the mayor and other delegation members. He promised to work through government channels to help clear the way for airlines to obtain permission to establish such flights.

“Direct flights would encourage more business activity and tourism to and from India and Houston,” Mayor Turner said after the trade mission. “It would be a win-win-win for airlines and people at both ends of the routes.”

Houston is the fourth busiest gateway for trade between the U.S. and India. India is Houston’s 10th largest trading partner among nations, with $4.3 billion in trade a year, growing by 36 percent from 2017 to this year.

Global energy business already triggers extensive air travel between Houston and India, which buys $1 billion worth of liquid natural gas from foreign sources every year as its booming population of 1.2 billion people creates a growing demand for energy. Mayor Turner emphasized that Houston has the right mix of know-how and corporate infrastructure to provide more LNG to India.

Indian companies such as Oil India Ltd., Gail Global USA, ONGC Videsh Ltd. and Reliance operate their U.S. headquarters in Houston. Along with Indian information technology companies such as Tech Mahindra and Tata Consulting Services, they employ tens of thousands of people in the Houston area.

Mayor Turner visited executives of Reliance, one of the three largest companies in India, at their headquarters in Mumbai. Reliance buys oil in Houston to feed its refinery in India, which is larger than any in Texas, and recruited construction experts in Houston to expand an Indian hospital that the company funds as part of its social responsibility programs.

“As in many nations around the globe, conducting business in India takes more than offering the best products and services at the lowest prices. It also involves building trust through long-term business relationships,” the mayor added. “That’s why meeting with business and government contacts face to face is one of the many valuable aspects of such a trade mission.”

“The Greater Houston Partnership was pleased to bring this business delegation to New Dehli and Mumbai,” said Susan Davenport, the organization’s chief economic development officer. “From the moment we were on the ground, the connections between the Houston business community and our Indian counterparts were strong, and I am confident new business opportunities and partnerships will result from the visit.”

The mayor and delegation members also met in Mumbai with India Vice President Shri M. Venkaiah Naidu and Mumbai Mayor Vishwanath Mahadeshwar. In New Delhi, Mayor Turner met with executives of BP, the international energy company whose U.S. headquarters are in Houston, and with India government ministers such as Minister of Housing and Urban Affairs Hardeep Singh Puri.

Singh Puri oversees a massive national program to build housing for low-income residents. In talks with Mayor Turner about private engineering and construction firms in Houston that may want to pursue contracts for the housing program, the minister said, “I would be very happy to help you pursue this business.”

Delegation member Gabriella Rowe, chief executive of Station Houston, a startup accelerator aiming to transform Houston into a world-leading hub for technology innovation and entrepreneurship, met with India counterparts at the National Association of Software and Services Companies, the Federation of Indian Chambers of Commerce and Industry, and the Internet and Mobile Association of India to forge innovation alliances.

The Houston delegation also included the CEO of Space Center Houston, William Harris. With India set to launch a manned space rocket in 2022, Space Center Houston stands to attract more tourists from India. Thousands of Indian tourists already visit the uniquely diverse city of Houston each year, spending an average of about $8,000 per person, and many come to visit relatives, who have had an indelible impact on the city’s kaleidoscope of cultures. The Houston area contains 82,000 people born in India and an additional 200,000 people of Indian heritage.

Mayor Turner also visited sites in New Delhi with connections to future cultural amenities in Houston for residents and visitors alike.
The mayor examined the Aga Khan Development Network’s restoration and expansion of buildings and grounds at Hamayun’s Tomb, a 16th century attraction that inspired the design of the Taj Mahal in Agra, India. The Aga Khan Foundation, led by the spiritual leader of Islam’s Ismaili movement worldwide, has announced plans to build a cultural center in central Houston.

The mayor also visited the serene Mahatma Gandhi Memorial, named for “the father of India.” Indo-Americans in Houston have purchased land in far southwest Houston to build a corresponding Gandhi museum.

Partial funding for the trade mission came from the city’s Hotel Occupancy Tax. 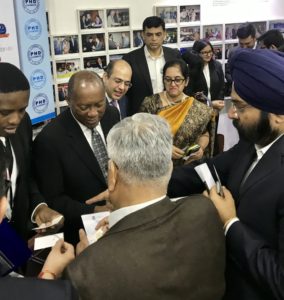 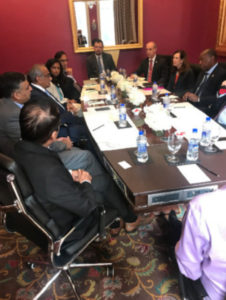 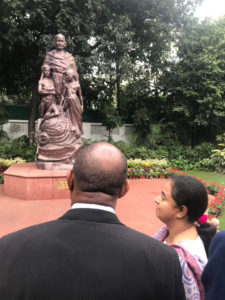