The Houston Public Library (HPL) is hosting a pre-screening of the film "The Public" written, directed,  produced and also starring Emilio Estevez. The movie provides a powerful perspective of the plight of the homeless and sheds light on how integral the library, its staff and services are to the entire community, particularly for vulnerable populations.

Emilio Estevez, along with Ryan Dowd, author of The Librarian's Guide to Homelessness, will visit the Houston Public Library's Central Library on Monday, February 25, to attend the library's weekly noon program, HPL Movie Series. Emilio Estevez and Ryan Dowd will meet and engage in conversations with library staff and customers to discuss the film.

The Movie Series program takes place weekly on Wednesdays at 12p. In addition to the movie, other components include guest appearances from speakers offering information on educational, health and workforce resources, as well as entertainment. Thanks to the generous support of organizations such as Random Acts of Kindness), customers also benefit from hot meals. Though open to the public at large, the program is immensely popular among Houston's homeless population. For that reason, partnerships with organizations such as the Coalition for the Homeless are key to ensuring that assessments are available to direct customers to essential services.

The City of Houston (COH), including HPL, works with numerous organizations such a the Coalition for the Homeless, to provide resources and aid to this population. "Through the nationally-recognized The Way Home initiative, the city is working with over 100 organizations to provide permanent housing and supportive services for individuals and families experiencing homelessness.  Since 2012, more than 16,000 homeless individuals have been permanently housed, resulting in a 55% reduction in homelessness.  For more information and to get involved, visit www.thewayhomehouston.org," per the COH Homeless Initiative Office.  HPL has included training for staff, such as Ryan Dowd's online Librarian's Guide to Homelessness, and a Coffee and Conversation series.

The library will host a special advanced screening for invited guests from library systems across the Greater City of Houston at the Edwards Marq'E Stadium 23 Imax and RPX Theater in the evening, followed by a question and answer session with Emilio Estevez and Ryan Dowd. 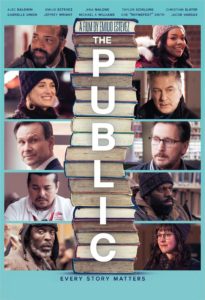 "The Public" is about downtown Cincinnati librarians Stuart Goodson (Emilio Estevez) and Myra (Jena Malone) who see their regular winter day shaken up when homeless patrons decide to take shelter in their library for the night. What starts as a peaceful sit-in quickly escalates into a face-off with the police and the media.
About the Houston Public Library
The Houston Public Library (HPL) operates 37 neighborhood libraries, three HPL Express Libraries, a Central Library, the Houston Metropolitan Research Center, the Clayton Library Center for Genealogical Research, The African American Library at the Gregory School, and the Parent Resource Library located in the Children’s Museum of Houston. With more than eight million visits per year in person and online, HPL is committed to excellent customer service and equitable access to information and programs by providing library customers with free use of a diverse collection of printed materials and electronic resources, Internet, laptop and computer use, and a variety of database and reference resources with live assistance online 24/7.