The suspect, Sergio Lopez-Castaneda (H/m, 37), is charged with aggravated assault of a family member in the 184th State District Court.  A 2016 booking photo of Lopez-Castaneda is attached to this news release.

The victim, Rafael Sanchez, 39, was transported to an area hospital in stable condition.

Mr. Sanchez was in a business parking lot at the above address with a group of unknown males.  A verbal altercation began which led to Sanchez shoving a male suspect.  The suspect drew a pistol from his waistband and shot Sanchez in the chest.  The suspect then fled the scene in a black Nissan sedan.  Paramedics transported Sanchez to the hospital.

The suspect was described only as a Hispanic male.

Further investigation led to the identity of Lopez-Castaneda as the suspect in this case and he was subsequently charged on January 24.  Attempts to locate him since that time have been unsuccessful.

Anyone with information on the whereabouts of Lopez-Castaneda is urged to contact the HPD Major Assaults & Family Violence Division at 713-308-8800 or Crime Stoppers at 713-222-TIPS. 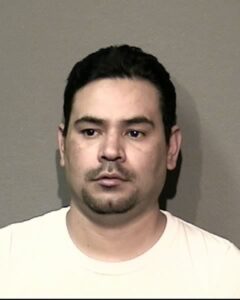