Charges have been filed against a suspect wanted in the fatal shooting of a man that occurred 6742 Hillcroft Avenue about 3:05 p.m. on Aug. 3.

The suspect, John Melendez (H/m, 30), is charged with murder in the 262nd State District Court.  A May, 2009 booking photo is attached to this news release.  Melendez remains wanted at this time.

The victim, Jose Armas, 33, was pronounced dead at the scene.

Officers responded to a shooting call in a business parking lot at the above address and learned Mr. Armas had been fatally shot.  Armas and a suspect were apparently involved in a road rage altercation when the suspect pulled a gun and shot the victim.

Witnesses stated the suspect, described only as a Hispanic male in his 20s with a short haircut, fled the scene in a red mini-van.

Further investigation identified the suspect as John Melendez and, on Thursday (September 5), he was charged for his role in this incident.

Anyone with information on the whereabouts of Melendez is urged to contact the HPD Homicide Division at 713-308-3600 or Crime Stoppers at 713-222-TIPS. 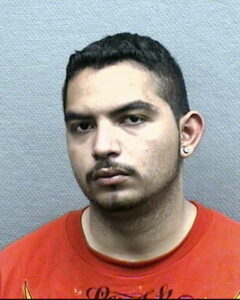