The suspect, Edward Charles Hill (b/m, 37), is charged with murder in the 178th State District Court for his role in the death of Jamel Brown, Jr., 26.

A booking photo of suspect Hill is attached to this news release.

Officers responded to a stabbing call at a Metro bus stop at the above address and found the victim with multiple stab wounds.  Paramedics transported the man to Memorial Hermann Southeast Hospital where he was pronounced dead.  A witness stated the suspect was last seen running west on Almeda Genoa.

The following day (Nov. 18), investigators released a composite sketch of the suspect.

Further investigation identified Hill as the suspect in this case and he was charged on February 2.  Authorities in Panama City, Florida, arrested Hill on February 5.

Hill was extradited back to Houston and booked into the Harris County Jail on Monday (Feb. 18). 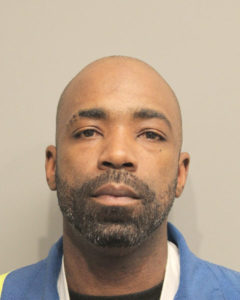