Charges have been filed against a suspect arrested in connection with the death of a juvenile female found at 7835 Grow Lane about 3 p.m. on Monday (Sept. 2).

The suspect, Priscilla Torres (H/f, 27), is charged with tampering with evidence – human corpse in the 351st State District Court for her role in the death of her daughter, Sierra Patino, 5 years of age.

A booking photo of Torres is attached to this news release.

Officers responded to a person down call at the apartment complex at the above address and found a female child, Sierra Patino, deceased inside an apartment.

Further investigation led to the identity of the child’s mother, Torres, as having a role in Sierra’s death.  She was subsequently charged and could face additional charges in the ongoing investigation.

Investigators are awaiting results of an autopsy by the Harris County Institute of Forensic Sciences to determine Sierra’s cause of death. 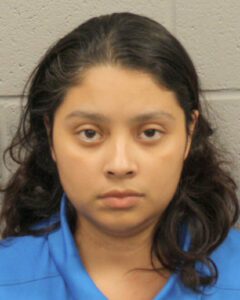