Houston police are seeking the public’s help in identifying a person of interest wanted for questioning in a shooting that occurred at 3401 Ocee Street about 11:30 a.m. last Wednesday (May 13).

The person of interest is described only as a black male with a thin build, about 6 feet tall and in his early 20s. He was wearing black pants with a white stripe, a white T-shirt and a grayish baseball cap. Surveillance photos of the male are attached to this news release.

The male victim, 49, was transported to an area hospital in stable condition.

The victim was sitting on an electrical box outside his apartment at the above address when an unknown male approached him. The suspect grabbed the victim and a scuffle ensued, during which the suspect pointed a pistol and shot the victim on the left side of his head. The suspect then fled the scene on foot. Paramedics transported the victim to the hospital.

Anyone with information in this case or the identity of the person of interest is urged to contact the HPD Major Assaults & Family Violence Division at 713-308-8800 or Crime Stoppers at 713-222-TIPS. 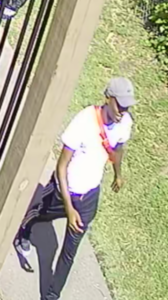 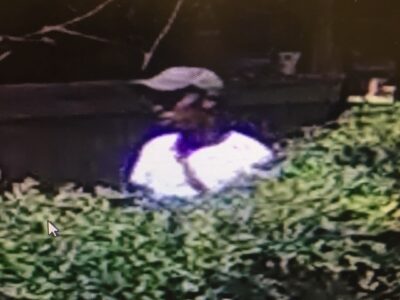