Charges have been filed against a suspect arrested in the stabbing of a woman at 12002 Richmond Avenue about 1:15 p.m. on Wednesday (May 20).

The suspect, Mya Shanae Fields (b/f, 20), is charged with aggravated assault – serious bodily injury in the 177th State District Court.  She is accused in the stabbing of Mehjabeen Ali, 55, who was transported to an area hospital in stable condition.

A booking photo of Fields is attached to this news release.

Ms. Ali was working in a dry cleaners business at the above address when a female suspect (Fields) came in wanting a ride home.  Ali called for a taxi cab, but the suspect stated she did not have money to pay.  The suspect became angry and assaulted and stabbed Ali several times in the face and head area with a kitchen knife.  She then fled the scene on foot, but was taken into custody a short distance away by responding HPD officers.

Paramedics transported Ali to the hospital.

Fields was subsequently charged for her role in the incident. 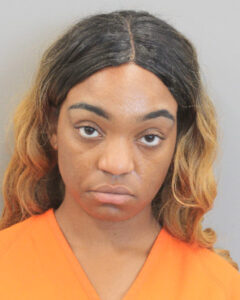