Charges have been filed against a suspect arrested in the shooting of a woman at 3300 Alice Street about 9:35 p.m. on Sunday (Feb. 21).

The suspect, Justin Raveon Tryon (b/m, 20), is charged with aggravated assault of a family member and possession with intent to deliver a controlled substance.  The charges are filed in the 209th State District Court.  A booking photo of Tryon is attached to this news release.

The victim, 32, was transported to an area hospital in stable condition.

Officers were dispatched to a shooting call at an intersection at the above address and learned a female had been shot in the neck and arm and a male was on scene with her.  As the woman was receiving treatment, she informed paramedics the male on the scene was the shooter.  Officers detained Tryon, found a gun and narcotics on his person and placed him into custody.

Tryon admitted to firing a weapon and said he and the woman were in a dating relationship.  He stated the two of them got into an argument in a vehicle prior to the shooting. 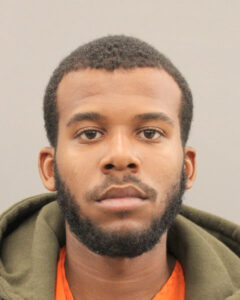