Houston police are investigating the shooting of a man at 246 Hohldale Street that occurred about 4 p.m. on Sunday (May 2).

The suspect, Rita Ochoa (H/f, 44) is charged with aggravated assaulted with a deadly weapon and felon in possession of a weapon in the 184th State District Court. A booking photo of Ochoa is attached to this news release.

She is accused in the shooting of Elias Yanez, 47, who was transported to an area hospital in stable condition.

HPD patrol officers responded to a shooting at the above address and learned Ochoa had gotten into an argument with a witness and grabbed a pistol Mr. Yanez had in his pocket. Ochoa waved the pistol in the air, at which point Yanez grabbed her and attempted to take the pistol from her. During the struggle, Yanez and Ochoa ran into a couch, causing them to bend forward and the firearm discharged. Yanez was struck in the abdomen. Paramedics transported Yanez to the hospital.

Ochoa was taken into custody at the scene and subsequently charged for her role in the incident. 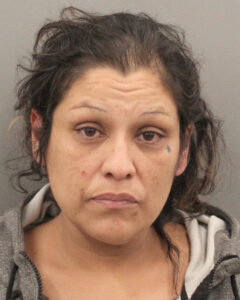