The suspect, Jaime Rafael Villanueva (H/m, 27), is charged with driving while intoxicated in Harris County Criminal Court #12. A booking photo of Villanueva is attached to this news release.

The officer who discharged his duty weapon was not injured in this incident.

An off-duty HISD police officer, in full uniform, was driving his maroon Ford F-150 pickup truck southbound in the 10500 block of the West Sam Houston Parkway South. The officer stated he changed lanes to merge in front of a silver Jeep Grand Cherokee, driven by Villanueva, to take the northbound entrance ramp onto the Southwest Freeway. Villanueva became upset and a road rage incident began.

Both vehicles came to a stop on the above entrance ramp and the officer was confronted by Villanueva. During the confrontation, a struggle occurred over the officer’s duty weapon and the gun discharged, but did not strike anyone. The officer was then able to re-holster his weapon and got his handcuffs out and attempted to handcuff Villanueva. A second struggle ensued and Villanueva took the handcuffs from the officer and threw them off the entrance ramp and onto the shoulder of Southwest Freeway below. At this point, the officer called 911 and HPD patrol officers responded to the assist the officer call. Villanueva and his female passenger were detained for investigation.

The investigation into the confrontation is ongoing. Villanueva was determined to be intoxicated and he was subsequently charged.

As is customary when an officer discharges a weapon in the city limits, the incident is being investigated by the HPD Special Investigations Unit and the Harris County District Attorney’s Office. 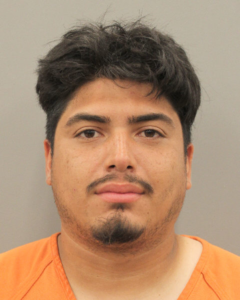