Charges have been filed against a suspect arrested in the fatal stabbing of a man and a woman found at 308 East Tidwell Road about 9:20 p.m. on Tuesday (Oct. 12).

The suspect, Nickie Costello (w/m, 35), is charged with capital murder in the 177th State District Court.  Costello remains hospitalized for injuries sustained in the incident.  A 2019 booking photo of Costello is attached to this news release.

He is accused in the killing of his parents, David Morgan, 50, and Juanita Costello, 56.

Officers responded to a stabbing call at the residence at the above address and observed an open door.  A man and a woman were found unresponsive inside the residence.  Both had suffered multiple stab wounds and were pronounced deceased.

A witness provided information and detectives eventually learned that the suspect (Costello) fled the scene in a vehicle, crashed the vehicle and was detained.  Costello was transported to a hospital and is expected to survive his injuries.

Charges were subsequently filed on Costello for the deaths of his mother and father. 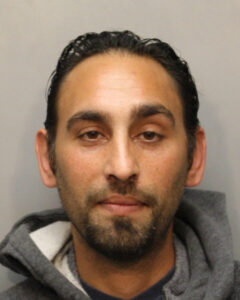