Charges have been filed against a suspect arrested in the fatal shooting of a man at 6301 West Bellfort Boulevard about 10:40 p.m. on Monday (November 21).

The suspect, Jairo Vanejas, 22, is charged with murder in the 482nd State District Court.  A booking photo of Vanejas is attached to this news release.

The identity of the victim, 27, is pending verification by the Harris County Institute of Forensic Sciences.

Officers were dispatched to a check on welfare call on reports a deceased male was inside an apartment at the above address.  A witness stated there was a shooting in the apartment the previous day (Nov. 20).  The witness did not call the police initially because he said he was scared and believed the shooter was still in the apartment.  The witness provided officers with a description of the suspect and his clothing description.  An officer knocked on the door of the apartment and a male matching the suspect description answered the door.  Officers detained the male, later identified as Vanejas, and conducted a search of the apartment, where they located a deceased male victim in a bedroom.  The victim had suffered at least one gunshot wound.

Vanejas was taken into custody at the scene and was subsequently charged in the case. 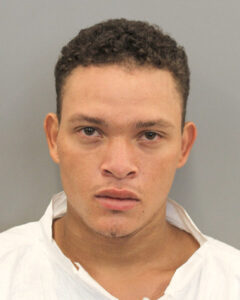