Charges have been filed against a suspect arrested in a fatal crash that occurred at 8000 Antoine about 8:20 p.m. on Monday (January 11).

The suspect, Lohortenes Sanders (b/f, 28), is charged with criminally negligent homicide in the 232nd State District Court.  A booking photo of Sanders is attached to this news release.

The female victim, 52,  was pronounced deceased at the scene.  Her identity is pending verification by the Harris County Institute of Forensic Sciences.

According to a witness, Sanders had an argument with someone in a nearby apartment complex.  When the passenger exited Sanders’ blue-colored Mercury Grand Marquis, Sanders drove erratically through the complex and then drove eastbound on West Gulf Bank Road.  A witness reported Sanders ran the red light at the Antoine intersection and was struck by a gold-colored Chevrolet Malibu traveling northbound at the above address.  The driver of the Malibu died at the scene.  Sanders was transported to an area hospital with minor injuries.

Sanders, also known as Lohortense Howard, was subsequently arrested and charged in the crash. 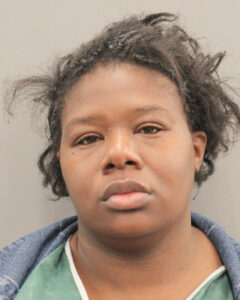