Houston police have arrested a suspect charged in a fatal crash at 6500 West Little York Road that occurred about 1:20 p.m. on Thursday (March 18).

The suspect, Eric Ross (b/m, 36), is charged with manslaughter in the 178th State District Court.  A booking photo of Ross is attached to this news release.

The identity of the male victim, 70, is pending notification to family members by the Harris County Institute of Forensic Sciences.

The victim, driving a silver Toyota Camry, was exiting a private driveway when Ross, driving a white Honda Accord eastbound on West Little York at a high rate of speed, struck the Camry.  The victim’s vehicle was then pushed into a blue Hyundai Santa Fe that was stopped at the intersection waiting for a green turn signal.  The driver of the Camry was transported to Memorial Hermann Greater Heights Hospital where he was pronounced deceased.  The driver of the Hyundai was uninjured.

Ross was detained and subsequently charged in the crash. 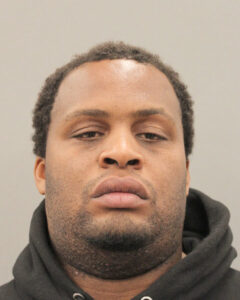