Charges have been filed against a suspect arrested in a fatal crash at 5900 Southwest Freeway (South U.S. Highway 59) service road about 3:30 a.m. on Sunday (April 11).

The suspect, Sebastian Matta (H/m, 26), is charged with intoxication manslaughter in the 178th State District Court.  A booking photo of Matta is attached to this news release.

The male victim, 5, was transported to Memorial Hermann Hospital where he was pronounced deceased.

The victim’s father was driving a maroon-colored Nissan Sentra southbound on Fountain View Drive when, having the green light, he entered the Southwest Freeway service road intersection.  The Nissan was then struck by a silver BMW 545i sedan traveling northbound on the service road.  The crash caused the Nissan to rollover.  According to witnesses, the BMW’s driver, suspect Matta, tried to flee the scene but was detained.

Further investigation determined Matta was intoxicated at the time of the crash and he was subsequently charged in this incident. 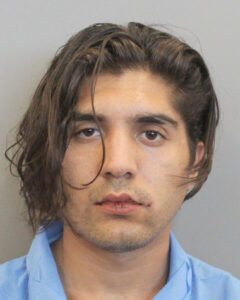