Charges have been filed against one suspect arrested – while two other suspects are still being sought – in a shooting incident at 10650 Northwest Freeway (U.S. Highway 290) service road about 2:20 p.m. on Wednesday (Feb. 5).

The arrested suspect, Michael Landry (b/m, 22), is charged with attempted aggravated robbery with a deadly weapon in the 179th State District Court.  A booking photo of Landry is attached to this news release.

A Texas Department of Public Safety trooper discharged a weapon during the incident.

Officers were dispatched to a robbery call at the business at the above address and learned a DPS trooper was working an extra job at the business.  Three black male suspects were observed exiting a black Toyota Corolla, which was left parked at the front of the business.  The suspects were armed when they entered the business and attempted to commit an aggravated robbery.  The trooper recognized the threat and feared for his life, the lives of the customers and employees in the store.  At that time, the trooper discharged his duty weapon one time at the suspects, who then fled on foot in different directions.  It is unknown if any of the suspects was struck.

One suspect (Landry) was later apprehended.  He was not injured.  The two other suspects remain at large.

As is customary when a law enforcement officer discharges a weapon in the city limits, the incident is being investigated by the HPD Homicide Division Special Investigations Unit.  The DPS Texas Ranger Division and HPD Robbery Division are also assisting in the investigation.

Anyone with information on the two wanted suspects is urged to contact the HPD Special Investigations Unit at 713-308-3600 or Crime Stoppers at 713-222-TIPS. 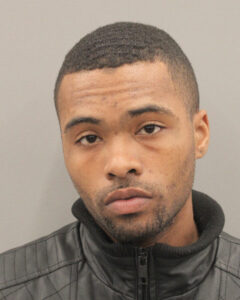