The investigation into the shooting of a male at 5203 Almeda Road about 2:25 a.m. on Sunday (April 1) will be referred to a Harris County grand jury.

The male victim was transported to an area hospital in critical condition with a gunshot wound to the head.

Cassandra Nickcole Damper (b/f, 25), present at the time of the shooting, was arrested and charged for tampering/fabricating of evidence in the 339th State District Court. A photo of Damper is attached to this news release.

Officer responded to a report of a shooting at a gas station parking lot at the above address and were advised the victim was sitting in a friend’s car with two other persons (Damper and a male). While playing with two pistols in the car, Damper accidentally discharged the weapon, striking the victim, who was sitting in the driver’s seat. When officers arrived, they detained Damper and a second person for questioning. Their hands were bagged so they could be tested for gunshot residue. While detained, Damper attempted to destroy the evidence by wiping off any gunshot residue that may have been present. Damper was arrested at the scene for attempting to destroy evidence. 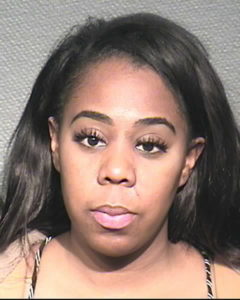