Houston police are investigating an incident in which an HPD officer wounded a suspect at 12319 Braesridge Drive about 11:55 a.m. on Friday (April 3).

The suspect, Kevin Terrel Johnson (b/m, 27) suffered a non-life-threatening wound and was transported to an area hospital where he was treated and released the same day.  He was subsequently booked into the Harris County Joint Processing Center on outstanding warrants.  A photo of Johnson is attached to this news release.

Sergeant R. Delasbour, who discharged his duty weapon, was not injured.  Sergeant Delasbour was sworn in as an HPD officer in August 2000 and is assigned to the South Gessner Patrol Division.

HPD Crime Suppression Team officers arrived at the above address in an attempt to locate suspect Johnson, who was wanted on outstanding felony warrants of burglary of habitation, unauthorized use of a motor vehicle, felony theft and misdemeanor evading arrest/detention.

Upon the officers’ arrival, they surrounded the residence, knocked, and announced themselves as Houston Police.  Officers were met by several family members who would not confirm whether or not Johnson was inside the home.  Officers called out to Johnson to make his presence known and gave anyone inside the residence the opportunity to exit.

Officers then began searching the inside of the residence, that included a dark attic area.  During their search, Sergeant Delasbour located Mr. Johnson hiding behind loose insulation in the attic.  Johnson, who was within close proximity of Sergeant Delasbour, suddenly raised his left arm.  Fearing for his safety and the safety of the other officers, Sergeant Delasbour discharged his duty weapon one time, striking Johnson in the arm.

Officers provided Johnson with first aid before he was transported to Memorial Hermann Hospital by Houston Fire Department paramedics.

As is customary in officer-involved shooting incidents that occur within the Houston city limits, this case is being investigated by the HPD Homicide Special Investigations Unit, the Internal Affairs Division and the Harris County District Attorney’s Office. 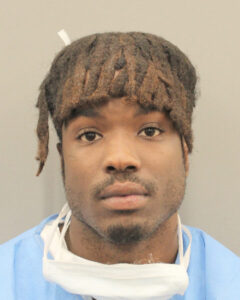