Charges have been filed against a suspect arrested in the fatal shooting of a woman at 5555 Holly View Drive about 12:05 a.m. today (Jan. 4).

The suspect, Kendrick Marquette Akins (b/m, 39), is charged with murder in the 337th State District Court.  A booking photo of Akins is attached to this news release.

The identity of the victim, 33, is pending verification by the Harris County Institute of Forensic Sciences.

Officers responded to a shooting call at an apartment complex at the above address and were advised a woman was shot following an argument with her boyfriend (Akins).  A witness believed the victim’s boyfriend fled the scene.  However, the boyfriend returned and confronted a concerned citizen who attempted to assist the injured woman.  The witness and concerned citizen stated the boyfriend fired another shot in the direction of the citizen, before fleeing the scene on foot.

Late this morning, Akins surrendered to officers at the HPD Northeast Police Station.  He was questioned by detectives and subsequently charged in the shooting. 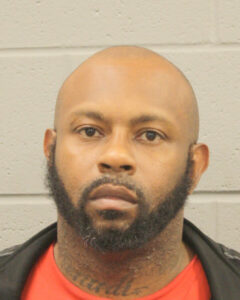