The second suspect, a 16-year-old male, was arrested and referred to the Harris County Juvenile Probation Authorities on a charge of capital murder.  Booking photos of juvenile suspects are not releasable.

The other suspect, Josue Barrera (H/m, 17), is still wanted and charged with capital murder in the 338th State District Court.  A 2020 booking photo of Barrera is attached to this news release.

The victim, Ruben Pineda, 15, was pronounced deceased at the scene.

Officers were called to a shooting call at the above address and found the victim lying in an apartment complex parking lot.  He had been shot in the torso and responding paramedics pronounced him deceased.

At that time, a preliminary investigation indicated there were two suspects.  One was described only as a tall, skinny black male in his late teens, wearing a blue hooded sweater, black pants and a shiny blue belt.  The other suspect was described only as a Hispanic male, also believed to be in his late teens, wearing a navy blue sweater, faded denim jeans and white shoes.

Further investigation identified the Hispanic male suspect as Josue Barrera and, on January 26, he was charged for his role in the shooting.  Barrera remains at-large.

The other suspect was identified and, on Thursday (March 18), he was arrested. 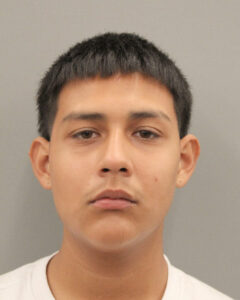